There's something about Brett

You've heard it all by now, Brett Favre is the common mans hero, Brett Favre is the type of guy we can relate to, Brett Favre really does wear Wrangler Jeans, blah blah blah. Favre has done some remarkable things in his career and for that I tip the cap, but unlike John Madden, it isn't in my contract that I can't bag on Favre just a little bit.

Playing in the NFL for 17 years is an accomplishment in itself and I clearly don't intend to diminish that, I'm simply asking for people to accurately place him in history. Two active quarterbacks are better than Favre ever was, and in my mind have reached a skill level that Favre never did, Tom Brady and Peyton Manning. Peyton Manning is going to shred every single last passing record by the time he retires. Tom Brady could potentially win 1 or 2 more rings before his time is up, move over Joe Montana and Terry Bradshaw there is a new tenant in that building. If Manning plays as long as Favre has he would only have to average 2,861 yards passing per season to pass Favre on the all time passing yards list. To put it in perspective, Peyton has never passed for less than 3,747 yards in a season. In Tom Brady's eight NFL seasons he has thrown 88 interceptions, at that pace he would have to play approximately 19 more seasons to reach the same amount of interceptions as Favre (288), he would be 1 year away from his 50th birthday at that point. Between Peyton and Tom they have had 4 combined seasons in which their passer ratings were over 100, Favre didn't have 1 in his 17 year career. Arguments? No? Thanks.

He isn't better than Marino, Elway, and certainly not Montana. Don't Argue. By my calculations that makes him clearly out of the illustrious "TOP 5" argument. Hall of Famer, Johnny Unitas played from 1956 to 1973, the time period in which he played was entirely too different to compare to Favre's career. Teams didn't pass nearly as much and if you strictly used statistics to prove your point then Favre would be higher on the list than Unitas:

Get my drift? Before I receive the hate mail from the "know all" cheese heads, I want to reiterate that I do take my hat off to the accomplishments of Brett Favre. The Green Bay quarterback actually is nothing like you & I, he makes millions of dollars more than you & I, he plays a game for a living unlike you & I, and more importantly he just retired at age 38, something you & I will only dream of. Brett's father would have wanted him to go out and perform like he did after he passed away, he did and it is remarkable, but if your looking for inspiration in that form call Laker guard, Derek Fisher, what he did in last seasons postseason while playing for the 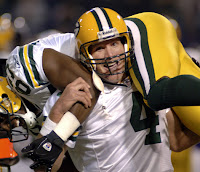 Jazz, is alot more inspirational. When Mike Vick gets over his marijuna addiction I won't hear people saying "he has overcome so much in his life" so I don't want to hear the same sentence about Brett Favre just because of his, yes, HIS pill addiction. Be a little more responsible when you discuss Brett Favre, he is clearly one of the top 10 quarterbacks of all time, you don't need stats to prove that point just watch his highlight reel. Brett played the game unlike most athletes do anything, he showed you his emotions, he made YOU and I remember what it was like when you scored a pop warner touchdown. When I was most in awe of Brett is after an interview with former Packer reciever, Antonio Freeman, Freeman told a small story about Brett, after a missed catch Freeman had his head down, Favre walked over to him and confidently said something like this:

"Don't worry about that one, your going to get alot more opportunities today, put that one behind you"

That is the type of guy Brett was, he was passionate about the game of football, he cared about the game of football, and gave the game and the fans everything he could. I am more impressed by that story than I am than with any stat or record of his. I don't want Brett Favre to have another season like 2006, I don't want to watch Brett play in another uniform, and while it was fun, I'm glad he is retiring, on his terms, and when he wants. Thanks Brett, its been great.
Posted by Lynchy at Saturday, March 08, 2008