Friday Morning Thoughts back at it! 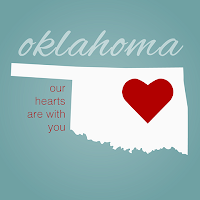 Let's Get After it!

Thoughts and prayers to the people of Oklahoma and specifically Moore, OK. On the real though, it's just flat out sad. No person living in this country of freedom should have to live in constant fear of losing everything in a disaster such as this. Yes, in America we shouldn't be exempt from natural disaster, but this is just a scary way to live and it seems like it is happening more and more. It might be that in this age of social media and unlimited access that we just see the images and hear of the destruction for longer periods of time and in a much more saturated way, yet it still seems like natural disasters are happening much more often. Tornadoes are too scary, they're unforgiving, they're unrelenting, and they leave no real survivors because everyone is ultimately affected in a horrible way by just having the memory of the fear. Be that as it may, our heart really goes out to these people who didn't deserve to have their lives shattered and their faith tested.

Through May 23rd, Major League Baseball has been somewhat of a second thought. Even in baseball rabid New York and Boston, we have the Bruins, Rangers, and till last week the Knicks on our mind. That being said, I've watched a ton of baseball already and two players specifically jump out at me. (Insert your thought on an East Coast Bias.) Red Sox right-hander Clay Buchholz is having a fantastic Cy Young worthy season. Am I bias? Possibly. The Red Sox have had some success with right-handers from the Lone-Star State, Beckett, Clemens, and now Buchholz. In the ten-starts Buchholz has had this season, the Sox are 9-1 in those outings, with Buchholz recording a 7-0 start through Wednesday. He's allowed two-earned runs or fewer in nine of those ten starts. The more important thing to remember is this; with a 1.73 earned run average, it's going to be Buchholz' responsibility to stop losing streaks and help this short-on-power Red Sox offense get wins. . . . Second player, Tigers slugger Miguel Cabrera. Last year the then 29-year old Cabrera became the first player in 45-years to win the elusive Batting Triple Crown. Even more impressive, he could do it again! Cabrera possesses that undeniable intelligence at the dish that we once reserved for hitters such as former superstar Manny Ramirez. His ability to hit for power, average, and pick-up 'ducks-on-the-pond' whenever possible. A month plus into the season and Cabrera is one home run shy of the American League lead while hitting .391 and has already driven in 55-runs, both good for the lead in either category. Could Miguel Cabrera be both the quietest and most dominant player in Major League Baseball at same time? We think so.

I'm really happy for the original honey badger, former Heisman finalist, defensive back Tyrann Mathieu. Sure, all of his problems and off the field issues are self inflicted and part of me still thinks that 'Badger isn't going to be able to stay out of his own way for the better part of his future NFL career. That being said, why can't we be excited that this young man is getting a shot at the next level, and a very good shot for that matter. The Arizona Cardinals went out and picked Mathieu up in the third-round of the April NFL Draft, without seeing him play in game competition in over a year. Mathieu just inked a $662,500 signing bonus (guaranteed money) on top of a his very carefully constructed 4-year deal. Arizona has put provisions in place to protect themselves in the event that the self-diagnosed marijuana addict is suspended by the NFL for drug related violations, well played. The fantastic part about this is what Arizona is doing to help him, they aren't paying him if he goes back to his old ways, they aren't bending over backwards for him, they're putting him in the same defensive backfield as another form LSU star, Patrick Peterson, who will play the mentor role. My point is, all of us loved watching Mathieu play football in college and while I don't actually think he was Heisman worth, he's a player in one way or another and it's good to see that he gets a shot at redemption as we all should at times!