We back at it, pour your coffee and bone up on the thoughts inside my dome! 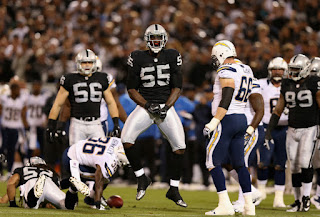 An Oakland Raiders top 10, first-round selection in the 2010 NFL Draft, former Alabama stand-out linebacker Rolando McClain, has made the rare decision to retire at the age of twenty-three (23). A month after signing with the Baltimore Ravens, McClain has made the decision that with court dates pending on one of his three arrests since December '11, he needs to remove himself from football, something he loves, in order to "get his personal life together." I'm choosing to look at this as a positive for this young man. Over the last twenty-four hours I've heard more than one 'talking-head,' mention that McClain was most likely going to get cut from the Ravens after his most recent arrest, as if that was the reason for his decision to quit, but why go there? I haven't heard anyone mention where McClain came from and his troubled youth which we read about in 2010 when he was an NFL draft prospect, why? McClain grew up in a housing project in Decatur, Alabama, the same city in which he's been arrested all three times in the past 18-months. His mother wasn't allowed near him after a restraining order was issued against her when he was 15-years old when she threatened to kill him with a kitchen knife! As a senior at Decatur High School, McClain's mother who had been diagnosed as having bipolar disorder, again made a threat but this time it was to kill everyone in his high-school causing the school to go on lock down. You thought you were embarrassed by your parents in high school when they dropped you off at a dance? None of this really excuses McClain's behavior with the police and his inability to keep his nose clean when he returns to his hometown, but it does help to explain why this young man so often makes poor choices. If in fact Rolando McClain is simply stepping away from the game with the intent on correcting his young life before something worse happens to him, then I'm happy for him. For some, football can be a way to get away from your personal life and really become a better person, but for McClain, it's a sort of catalyst for his bad behavior, I'm guessing. Success in football may have given McClain the feeling of invincibility, the money, the people that come around you, it might have all just been too much for him to control. For a person who has been let down by the people who are meant to be around him for support, his parents, is it really a surprise that McClain would search for that support in the wrong places off the field? For his sake, we really hope everything works out for the best for young Rolando McClain, and while we loved him at Alabama, I never want to see him play football again, because it's just not the best thing for him. 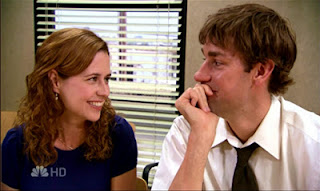 NBC's The Office has finished after nine seasons on air. I'm truly depressed about it. I watch a ton of television, and that has got to be an understatement. Every Thursday since 2005, I've been hooked on The Office, to the point where on multiple trips to NBC's "30-Rock" I've made it a point to stop into the NBC Store and make such ridiculous purchases as a Michael Scott bobble head doll. One-step further, the only argument my wife and I had over our guest list at our 2012 St. Patrick's Day wedding, was her refusal to invite John Krasinski (Jim) and Jenna Fischer (Pam). Side note: In my defense, if you're going to have a wedding start off on the right foot, why not invite the only other couple you've envied over the past ten years?!? To be blunt, this show, a brain child of Ricky Gervais and Ben Silverman, has literally been the best show on network television since Friends. Its entire concept, its methods, its humour, its story, the actors, the guests, everything has been nothing but perfect to me. Steve Carell as Michael Scott will make me laugh every single time I see him. Rainn Wilson is one of the funniest men on television and as Dwight Shrute has made me fall off the couch laughing for nine seasons. After the Heisman Trophy, the only other award I ever wanted to hold was a "Dundie." It's possible that in watching John Krasinski's character Jim, has at times reminded me of myself and my hatred for working for 'the-man' very early on in my career, and that his relationship with his on-screen wife Pam, would be my relationship with my wife, is that crazy?!? I will miss The Office so very much, I've seen every single episode, I've laughed and cried even, I've waited for seasons to come out on DVD just to watch them again. I didn't want the series finale to end last night, and when my wife went to bed as she so often does before me, I watched it all over again just to make sure I didn't miss one thing. If this show doesn't live in for generations, then I don't know what good television is.

Not a hockey fan, admittedly. However, you've got to hand it to overtime-playoff hockey, because it's done right! Edge of your seat, next person to slide the puck around the goalie who is too big for the goal, and the game is over in an instant! 90% of the time, I don't even know if someone scored! Seriously, take the crowd out of it, take the announcer out of it, ask the players not to raise their arms and jump around, and I wouldn't even know if someone scored or didn't. But that's the point! You can't take those things out of it, that's why playoff hockey does it better than anyone else! The fans are banging on the glass, they're on top of the rink! You want to bite your nails off, and I'm not even a 'bite my nails nervous' type of guy! (Seriously though, 'bite your nails' guy isn't getting any chicks!) I don't think my heart can take playoff hockey and that might play into why I'm not a hockey fan. I don't ever even know how a goalie makes a save with so many things going on around him. When the Boston Bruins won an epic game seven earlier this week after being down 4-2 with minutes remaining, I wasn't really impressed by them so much as I was unimpressed with the Toronto Maple Leafs goalie, who cares what his name is. Here's the thing, that guy let up a bunch of goals in like seconds, he turned into a puddle, but how would you do? I could get a major league baseball player to pop-up to the outfield, I even think I could hit a three-pointer in an NBA player's face, just once, but save a goal?!? Not a chance bro! Nevermind that it is coming at you incredibly fast, how about the fact that the puck is the size of a tic-tac and there is at least a half-dozen people in front of you blocking your vision. My thought this morning when I decided to include this little blurb was this, forget the first two and a half periods plus, turn the NHL games on when it's tied up and about to go into overtime, pick a team, then sit on the edge of your couch, it's pretty wild. . .