Due to my paying employment requiring more and more of my time as of late, I needed to find a better way to stay more consistent with my postings. For some unknown reason, I'm pretty damn lucid on Friday mornings as well. These developments are what gave birth to: Friday Morning Thoughts. Also, as a precursor to our inaugural Friday Morning Thoughts, I should prepare you that I won't just be covering sports, gaming, and horse racing but also will inject some pop-culture so to speak, in these columns . . . 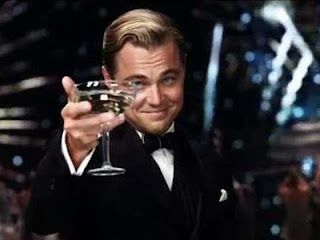 The Summer of Gatsby has officially begun. With today being the release of director Baz Luhrmann's theatrical interpretation of F. Scott Fitzgerald's 1925 novel, The Great Gatsby, who isn't thinking about Gatsby! A couple things jump out at me right away; (1) Did the youth of 1925 line-up outside bookstores all over the country awaiting this novel as did our youth for each of the J.K. Rowling Harry Potter books? I'm guessing no, depression and world wars most likely get in the way of that. (2) Are teacher's still assigning this novel on summer reading lists all over the country? If so, I highly advise the children of America to read the book and if you won't do that, at least rent the 1974 Francis Ford Coppola version starring Robert Redford as Gatsby and Law & Order legend Sam Waterston as Nick Carraway. Trust me on this one, Baz Luhrmann's last go at bringing story to the theater was Shakespeare's Romeo & Juliet, and that wasn't exactly how Bill Shakespeare had hoped his most famous play would be brought to the silver screen. Lastly, this is literally my favorite book ever written and casting DiCaprio as Gatsby in this movie could possibly be the biggest success in cinema this year. Do you recall the last DiCaprio flop? I can't. 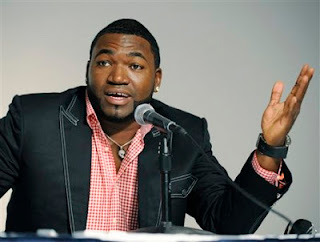 I don't see why Red Sox slugger David Ortiz is getting so hot under the collar about people questioning his hot April start in 2013. This is the price that baseball players should pay for having zero conscious when it came to juicing for twenty-five of the last thirty years. Ortiz has had to deal with these suggestions previously, and yes we should all question a man coming back from a serious foot injury who will turn 38-years old in November, that comes out of the shoot hitting 0.67 higher than his career batting average. Look, some things in major professional sports are just never going to pass the smell test and that's a fact. You can't watch pitchers and hitters alike smash every major statistical record of a game which is well over 100-years old for the better part of the last century and just clap your hands blindly. For Ortiz to make such a federal case out of the media questioning his hot start, it makes him look more guilty than ever! Here's the bottom line though, I love David Ortiz, I've loved everything he's done for the City of Boston, the people of New England, and the Boston Red Sox, but there is no way that I'm going to say that he should get a 'pass' because he's a sensitive guy at heart. Grow up Papi.

Do we have to move on from Tim Tebow so quickly? Aren't a couple things still true when it comes to Tebow? For instance, the man who drafted Tebow and believed in him - former Broncos head coach now Patriots offensive coordinator Josh McDaniels - he's still coaching in this league. Is he the only man in the league who thought that Tebow could win or at least contribute? What did the former Gator signal caller do that proved he couldn't be that player McDaniels thought he could be? Won a division, won a playoff game, now out of the league? The Jets moved on from Tebow after bringing him on board last year and never giving him a legit shot at the starting job. I'm sorry, but if you are trusting the opinion of Jets owner Woody Johnson, head coach Rex Ryan, and former general manager Mike Tannenbaum, well that's a you problem. Between the three of them, there isn't a sound football mind in the room. We've addressed in previous columns that we think that Jacksonville could most benefit from Tebow, and now their fans don't want him?!? The Jaguars are a terrible franchise, their fans don't even know what winning looks like, but somehow having Tebow under center is a bad thing? The guy wins. If you bring him on board, let him compete and play for the position and he doesn't win you games, you're back in the same position you would have been anyway?!?! I'll never understand the overwhelming criticism of Tebow, no one ever suggested he was a better option than Peyton, Tom, Aaron, or Drew but is he better than Mark Sanchez and Blaine Gabbert? We think so.