The Butler Bulldogs aren't going to be one and out. San Diego State hasn't disappointed, the Big East is as I thought they were, overrated. As much excitement as the first couple rounds of the tourney has brought, you better buckle in and get ready for an exciting Sweet 16.

Rock Chalk Jayhawk! Welcome to the Southwest Region, live from San Antonio, Texas. Let's get right to it, the top-seeded Jayhawks steamrolled through Boston University and the Illini of Illinois with relative ease. Looking down at the remaining opponents in their region, the 12th seeded Spiders of Richmond, the 10th seeded Seminoles, and surprise of the

tournament Virginia Commonwealth (11), can anyone play speed bump to the Jayhawks road to the Final Four? The answer is an emphatic, nope! Just one loss since the end of January and two throughout the entire season, Kansas is very, very scary. Stop with the Virginia Commonwealth talk, head coach Shaka Smart will get his big time opportunity soon enough. The Spiders who get first crack, Vandy and Morehead aren't exactly a quality tune-up for Bill Self's squad. Maybe, and I say that with much trepidation, the Seminoles long and athletic bunch led by senior guard Derwin Kitchen can cause fits for Kansas, but I doubt it. You want a call? I think you've got it.

Put your arms together repeatedly, be obnoxious, the Gators and Billy Donovan are back. Welcome to 'Nawlins and the Bayou, it's the Southeast Region. I want nothing more than to see Butler and BYU step aside and remove 'Jimmer Time' and

the Butler Bulldogs from our existence. A Wisconsin vs. the aforementioned Florida, would be an ideal matchup of two very coached teams that would battle to the buzzer. The Gators have jumped out to a pretty good start with a quality 8-point win against UCLA in the previous round. As for the Badgers, they've slammed Belmont and knocked off Kansas State, a big tournament hopeful. For the Jimmer Fredette and BYU fans out there, you might just be the only ones cheering for this squad. For Butler, we've seen that show and like a re-runs of Everybody Loves Raymond, I'm just not interested. You're getting Wisconsin & Florida - deal with it.

Wild, Wild, West Region, to Anaheim go San Diego State, Connecticut, Duke, and Arizona - which just got a whole lot more interesting. I take back everything I said about this region, pre-tournament.

San Diego State gets a huge test in Connecticut and Kemba Walker on Thursday night. There is a reason this team won the Big East tournament, and even more of a reason why Kemba Walker looked so good doing it. As for Duke v. Arizona, before you pencil the 'Dukies' into the round of eight, check out who they're playing. It was only a matter of time before former Xavier coach turned Arizona front man Sean Miller was going to put the Wildcats back on the map. After escaping Memphis and Texas, Arizona has really started to get some respect. No bones about it though, the Blue Devils are poised to defend their title and this region in Anaheim goes through Duke.

The only rough part of this tournament for the Buckeyes, they're in Newark. Playing for the East Region, the Buckeyes are joined by Carolina, Kentucky, and Marquette, all tournament tested. After ripping their way through two cupcakes, 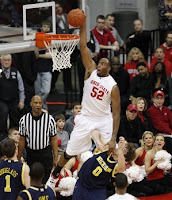 yes that is what George Mason is, the Ohio State Buckeyes get Kentucky and I don't expect things to change. Turn your attention to Marquette and Carolina, for those of you who are die hard Big East Fans, watch the ACC rip through Marquette bouncing just one of their two remaining from a field of 11. Carolina and Ohio State are on a crash course for the next round, but don't expect Ohio State to lose sleep over it. David Lighty, Jared Sullinger, Dallas Lauderdale, please. This team is super strong with a ton of talent and their about to show much. Move over Pope Tressel *(stole that) there is a new story in Columbus. I expect Ohio State to roll over this region and turtle anyone in their path, the question remains can they win it all?