Stevens, Calhoun, Walker, Howard, Lamb, and Mack, welcome to the Final Four, done. As Connecticut yet again stood up when called upon and Butler put down the Gators in overtime, we're left with the first two tickets to the big dance punched.

Why do we still have that stunned look? An upper class men dominated program, a core of players who have been to the mountain top, and a head coach who for all intents and purposes is more successful over the last two seasons than any coach this side of Kansas' Bill Self. Isn't that the recipe? Shouldn't we have assumed that Butler wasn't just Gordon Hayward and his band of merry men? As

crazy as it sounds this morning, a day after Butler dropped Florida in overtime and advanced to their second straight round of four, we did just that. We dismissed any chance Butler had at reaching Houston. We dismissed Brad Stevens, a head coach with a 60-14 record over the past two seasons. We dismissed junior guard Shelvin Mack, a player who a huge part in Butler's 2010 run just a season ago. We dismissed forward Matt Howard, who ripped down over 145 more rebounds this season than he did the last. We dismissed a team that doesn't quit, they play hard, they're talented, and they're very well coached. You won't see the Bulldogs locking arms in the final minutes, they believe they're supposed to be there and that's why they're headed to Houston.

The Connecticut Huskies have ripped through the West Regional, on the heels of ripping through the Big East Tournament, and what's next? In 19 days the Huskies have won nine straight games against the likes of DePaul (insert joke), Georgetown, Pittsburgh, Syracuse, Louisville, Bucknell, Cincinnati, San Diego State, and yesterday Arizona. With stud guard 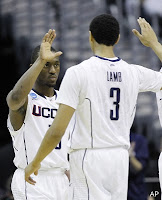 Kemba Walker averaging 26.3 points over the stretch, and the coming of age for 6'5" Georgia native Jeremy Lamb, putting up 16 points-per of his own, the Huskies have become so very dangerous. Placed way in the back of their minds is the Connecticut team who went 4-7 down the stretch and found themselves as a ninth seed in the Big East tournament, that team doesn't exist anymore. Let's go back to Walker for a moment, because what this guy has done is flat out amazing. On Thursday night in their Sweet 16 game, Walker went off on a stretch where he scored 14 straight points for Connecticut en route to roaring past San Diego State. Is this kid going to ever get tired? Even I was wrong, when Kemba Walker is on the court he said it best "I'm good."