After another exciting week of NFL action, several things have stuck out. Between the Cleveland Browns shocking both the Patriots and Saints, the Cowboys miserable start, and several usual suspects coming to play in 2010, there is plenty going on. 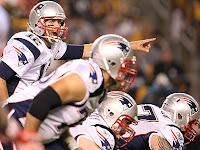 Logan Mankins has hurt them. [3] They just don't lose at home. [4] Aside from the Jets & Packers, their remaining games should all be considered wins. Currently at 7-2, the Patriots are really coming to terms with being the NFL's favorite. Their young defense is maturing while Tom Brady and Belichick are getting back to the roots that won them three championships. This past Sunday night in Pittsburgh, the Patriots blew up a defense with 32 points, a defense that hadn't given up more than 21 points in any games prior. Noticed served. The Patriots may have slipped up in Cleveland two weeks ago, but how can anyone not call them the favorite right now.

Here come the Chargers! Bouncing back after a 2-5 start, the Chargers are on the move. In each of their last two games, both wins, Philip Rivers has really put this team on his back. Rivers has thrown for 6 touchdown passes, 600 yards, while 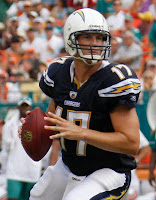 completing 44 passes. The 62-point outburst in the last two games have really let you asking where this was earlier this season. Malcom Floyd and Legedu Naanee are going to return to an offense that has started to already put things together. Divisional games against Denver, Kasnas City, and Oakland in three of the next four games are going to hopefully erase an awful start. I'll leave the Chargers with this, it's going to be hard to say you'd take any quarterback in this league over Philip Rivers, he's a gamer who both wants to win and has the ability to do it.


Respect the Falcons, they've earned it - The 7-2 Falcons put their best foot forward against Baltimore last week. Against a quality defense, Atlanta flexed their muscles tuning up the Raven secondary for 316 yards. Quarterback Matt Ryan is officially over his sophomore slump from a season ago (22 TD's, 14 INT's) and has already thrown 16 TD's through 9 games and

only five interceptions. Receiver Roddy White is also in the midst of a breakout season on pace to record almost 1700 yards receiving and catch 13 TD's, both career highs. Their rushing offense is among the top eight in the league while their rushing defense is ranked #7. Taking their show on the road in four of their next five, away from their 5-0 home record, the Falcons have the opportunity to set themselves apart from the rest of the NFC. Now they're earning respect from everyone.

Speaking of the NFC South - Did anybody believe the Tampa Bay Buccaneers would be 6-3 heading into week 11? With losses against only Pittsburgh and divisional rivals Atlanta and New Orleans, the Bucs have really impressed. They've got three of the next four games on the road, including in Baltimore. The big test will be their second match up with Atlanta. The 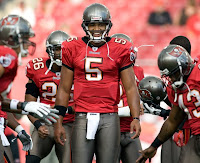 division leader coming to their place to play, a win would really cement the Buccaneers season, especially if it put them in place to play for both the division and a wild card playoff birth. With a 31st ranked rush defense, the Bucs are finding ways to puts points on the board and keep themselves in position to win. 2nd Year quarterback Josh Freeman is putting together quite a season. He's completing over 60% of his passes and has thrown over 12 touchdowns, two more than he did all of last season. You've really got to be impressed with this team, a team that won just three games a year ago.

World, Meet Jason Garrett's 1-0 Dallas Cowboys - It's just one game, after five consecutive losses. However, that team who showed up in The Meadowlands on Sunday afternoon, that was something entirely different. The Cowboy running backs moved the ball in the ground game, rushing the ball 27 times for 103 yards. A head coach standing at a podium answering questions, not sitting down looking

dejected. Players dressing in full pads on Wednesday & Thursdays, and dressing ready to work on Sunday. I won't overreact . . wait, yes I will. Despite their starting quarterback being laid up, this team is too talented to not answer the bell at some point, you saw that on Sunday. Receiver Dez Bryant torched the Giants, he outplayed their secondary and made their special teams work. Bryant caught three Kitna passes for over 100 yards receiving and returned four kicks for 86 yards. Receiver Roy Williams was blocking down the field for over 50 yards ushering running back Felix Jones into the endzone. Working together, staying away from costly penalties, standing up to the Giants, these Dallas Cowboys were something different. Maybe it is just one game, or maybe Jerry was right about Jason all along.

For more catch us on The RightNow Podcast