It was the inevitable - Jerry Jones' firing of head coach Wade Phillips. In the aftermath of an embarrassing 45-7 loss, in prime time on Sunday night, the Cowboys seventh loss in just nine weeks, it was inevitable.

In what has become the most disappointing season in Cowboys history, the firing of Wade Phillips is a mere afterthought. Phillips' defense had allowed 121 points in the last three games. The Cowboy offense is now being led by 38-year old

Jon Kitna. A 1-7 record heading into The Meadowlands, what was left for Jones to do? As Green Bay took a 28-7 lead into halftime on Sunday night it had become painfully apparent, the 2010 Cowboys had given up on both Phillips and the season. In 100 days North Texas will play host to Super Bowl XLV. The Super Bowl many pegged these very same Cowboys to reach, with the dream scenario gone for The Owner, the string could not be played out, and Wade Phillips was fired on Monday afternoon. 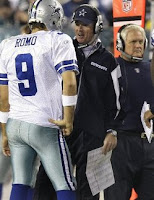 the 2006 season. Jones has retained Garrett each of the last four seasons, to both run his offense while grooming quarterback Tony Romo and play heir to the Cowboys till Phillips' eventual departure. With eight games remaining, Jason Garrett's training wheels are off and his trial starts in the toughest of places in New York.

Moving on. What YOU need to know:

1. The Cowboys weren't going to win a Super Bowl under Wade Phillips. Saints head coach Sean Payton, Giants head coach Tom Coughlin, Steelers head coach Mike Tomlin, all head coaches who are NOT referred to as "a very nice man," and all coaches wearing Super Bowl rings. I'd like Wade Phillips to run my general store while whittling a bird house out of beechwood, but it when it comes to beating up the Redskins and Eagles week in, week out, he's not your guy.

2. The Dallas offensive line is in need of a serious tune-up. We're not talking a couple of free agent fill-ins, we're talking major overhaul. It doesn't matter how well 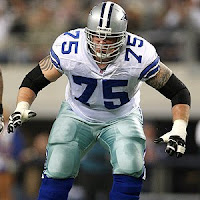 balanced your offense is, if you can't protect the quarterback and you can't push the defensive line off the ball, neither your passing attack or ground game will produce. Tackle Marc Colombo was dominated by Packers linebacker Clay Matthews on Sunday night, he's 32 and sprinting to the end of his career. If guard Leonard Davis needs to be benched another time to remind him of his responsibilities, it's over. He's a 32-year old overweight, out of shape veteran. That's just two of 'em.

3. If you haven't landed on it yet, you can blame Mike Jenkins for the majority of this secondaries issues. Jenkins was a Pro Bowler a year ago, now he's leading the league in pass interference penalties. If you're really a defensive back from South Florida, it's about time you start living up to it. He's getting abused by quarterbacks who know the referees are staring directly at his hands

every time he drops into coverage. When the Cowboys select Patrick Peterson, DB LSU next season, (wishful thinking here) Jenkins will get it. Peterson is a monster in the SEC. He's one of the most feared defensive backs in college football who commands respect and makes quarterbacks be aware of him at all times. If the Dallas Cowboys plan to restock their secondary next season you do it at all costs through Patrick Peterson.

4. Jon Gruden and Bill Cowher?!?! Just because two Super Bowl winning coaches, who more resemble Jimmy Johnson and Bill Parcells, are off the sidelines but itching to get back, doesn't mean they're Jerry's #1 choices. Not by a long shot. The Cowboy owner wishes for one thing to happen here, Jason Garrett be successful. The ultimate hands on owner wants no part of giving personnel control to Gruden or Cowher, men who not only deserve that control but will demand it. Garrett becoming a winning head coach in Dallas proves one very important thing for Jerry Jones; he's done it his way. Keeping every last bit of control he currently has, ensures this team is his and his only. The successes and the failures, something Jerry has never been afraid to own.

5. Impressed by Dez Bryant? Take that to the bank. The rookie 1st round pick has done nothing shy of impressed everyone who has watched him. As sad as it sounds, he's at 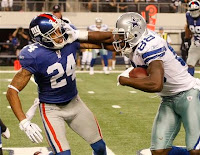 times looked like the only player this side of Bradie James and Keith Brooking who cares. The veteran quarterback Jon Kitna seems to started looking for Bryant more and more. Catching 16 balls in the last two games combined, Bryant has found the endzone 4 times in the last four. Returning kicks or making catches, Dez Bryant is fighting his way to respect in this league, if you like it or not!

So we're turning the page on this half-a-season in Cowboyland. The firing of Wade Phillips is done, it's not looming any longer. Tony Romo is going to miss the remainder of the season. I've ripped off the band-aid as fast as possible.

Get After It! For more, hit us on Twitter!
Posted by Lynchy at Wednesday, November 10, 2010