Stunned! Not really, it's the SEC.

On every given Saturday, the Southeastern Conference comes hard. They've got playmaking Heisman candidates littered throughout, they've coaches second to only each other, their stadiums ring louder than everything this side of

Autzen, and it's only fitting they impact the college football landscape more than any other. Someone challenges Denard Robinson and Terrelle Pryor for the Heisman, of course he's an SEC quarterback. A team vaults Ohio State, Boise State, and Oregon to the top, of course it's an SEC team. A coach makes calls that leave you stunned, of course he's from the SEC. This Saturday was like every other in the Southeastern Conference.

It's their biggest win in school history, South Carolina was strong. Alabama got away from their rushing attack early, down 21-3 those offensive coaches on the 'Tide sideline forgot who they were. Let's give credit where it's due though. Steve Spurrier came out with a gameplan to slow down the 'Tide and the players who wanted to do just that. South Carolina took advantage of turnovers early, they responded when Alabama 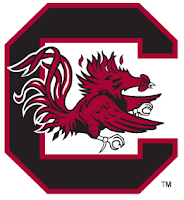 made their pushes back, and that crowd at Williams-Brice, woah! The quarterback Stephen Garcia is on a two game stretch where he almost beat Auburn at Jordan-Hare and did beat the best team in the country. Garcia has thrown six touchdowns in the two games, he's completed all but 9 of his 48 pass attempts, and more importantly he got that team behind him. Now in the driver's seat in the SEC East, the team which just knocked off mighty Nick Saban and Alabama can look down the road a bit at their games against Florida and Arkansas. No let down games, more Marcus Lattimore, and tough defense that halted those big-time 'Bama running backs. The Gamecocks deserve this week, they really earned it.

Ben Hill Griffin was stunned. The Mad Hatter (LSU head coach, Les Miles) called a fake-field goal with under a minute remaining down by only three points. A week removed from squeaking by the Tennessee Volunteers despite terrible clock management in the final seconds, the same head coach who was under fire all week pushed everything to the back burner and went with his gut. Scrapped the 53-yard attempt, lateraled

to the kicker from the holder, and a run toward the first down marker. With that, the LSU Tigers hit the end zone just seconds later and were leaving The Swamp with the Gator fans stunned. Improved to 4-0 in the SEC and 6-0 overall, LSU just wins. Still want to keep them on the outside of the Top 10 looking in? With Auburn, Alabama, and Arkansas remaining on their schedule, the Tigers have an uphill road ahead of them. They've got two quarterbacks who play perfect compliments to each other, a defense as tough as any in the SEC, and a head coach with more moxy than brains. Hey Les Miles, whatever works right?

Why has it taken so long to recognize Auburns Cam Newton? The 6'6" junior quarterback has led Auburn to a 6-0 record. That South Carolina team who beat the former top ranked Crimson Tide just yesterday, Newton beat them. Behind only Boise State Heisman contender Kellen Moore, Newton has a mind boggling 180.7 QB passer rating, second best in the country.

Cameron Newtons 9 rushing touchdowns are as many as fellow Heisman candidates Oregon's LaMichael James and Michigan's Denard Robinson. His 12 touchdown passes, more than top flight passers Oklahoma's Landry Jones and Florida State's Christian Ponder. Cameron Newton is responsible for 21 Auburn touchdowns this season, his win in Kentucky was one of the most dominant performances by a quarterback this season. 13 Of 21, 210 yards through the air, 198 yards rushing, and four rushing touchdowns. Don't worry about Newton though, he finishes the season in Tuscaloosa against Alabama. If Cam Newton wanted a final statement to give Heisman voters, that'd be the perfect time to do so.

Final Thought: Earlier this morning the Week 6 AP Poll was released. After 'Bama's loss to South Carolina then dropped to #8. Those Gamecocks moved from #19 all the way to #10. Following their victory over Florida, LSU moved from #12 to #9. Cam Newton's Auburn Tigers are the highest ranked team in the conference moving to #7 from #8. That aside, I'd take any of these four teams over each and every one of the six ranked above them on a neutral field, no question.