Kansas City @ Houston If ever Chiefs quarterback Matt Cassel was going to have a game for himself, it'd be this week in Houston. The Texans 32nd ranked passing defense is coming off an embarrassing 34-10 home loss to the Giants. Gave up 297 yards passing to Eli Manning while watching receiver Hakeem Nicks haul in 12 passes for over 130 yards. Meanwhile, the Chiefs have yet to give up more than twenty points in a game and their rushing offense is currently the third most productive. Behind Jamaal Charles (6.5 yards per) and Thomas Jones (3.9 yards per), the Chiefs ground attack should keep Houston busy and their defense on the field. Chiefs +4.5

Seattle @ Chicago The Bears 4-1 start has surprised everyone. With Seattle, Washington, and Buffalo coming up, could the Bears jump out to 7-1? As exciting as that is, it's not all smiles in The Windy City. Linebacker Lance Briggs is out this week and given his play opposite

Brian Urlacher this season, that's a big hit to the Bears defense. Coupled with the concussion Jay Cutler suffered in that nightmare first half against Giants two weeks ago, the Bears do have some cause for concern. Just like Chicago did in Cutler's absence last week, they need to get running back Matt Forte going early. When offensive coordinator Mike Martz was forced to give the ball to the Bears talented running back, he put up 166 yards on just 22 carries. Seattle can't hang on the road, take the Bears at home. Bears -6

Miami @ Green Bay Finally it appears that we have an answer, Aaron Rodgers will be playing against Miami on Sunday afternoon. Unfortunately, the injury bug has banged up the once favorite in the NFC Packers. With running back Ryan Grant, tight end Jermichael Finley, and now linebacker Nick Barnett all gone for the season, the Packers are reeling. Questions about the health of Clay Matthews, Ryan Pickett, and corner Sam Shields are destroying a defense that was looking fantastic in the early going. Playing with all those injuries against a Dolphins team in desperate need of a win doesn't look good. Miami has looked good on the road so far, I'll take them getting points. Dolphins +3

San Diego @ St. Louis The Rams continued with their gameplan last week against Detroit, despite losing 44-6. St. Louis is putting the ball in the hands of their rookie quarterback Sam Bradford, very often. 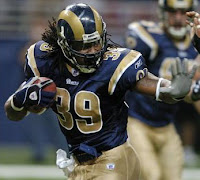 Bradford threw another 45 attempts last week making that his fourth of five weeks with over 35 attempts. The problem going forward isn't how many times he's going to throw, but who is he going to throw to?!? With the recent injury to Mark Clayton, Bradford has his hands full. While San Diego has been good against the run, Rams running back Stephen Jackson is the best back they will have seen after this Sunday. The Rams are going to need Jackson to carry the offense with the injuries in the passing game and with the Rams all-time leading rushing title at stake, expect Jackson to really show up. Rams +8

New Orleans @ Tampa Bay The Bucs being 3-1 is a surprise. The Saints offense yet to score over 25 points, even more of a surprise. New Orleans has really struggled over the early going of the season. Close wins against the likes of a 1-3 Minnesota team, an 0-5 49ers team, and the 0-5 Panthers aren't impressing anyone. Then there was the 30-20 loss to Arizona, a team under a rookie quarterback taking his first NFL start. Without the injured Reggie Bush and going on the third week without running back Pierre Thomas, the Saints rushing offense has dropped to 31st in in the league. After what the Saints did last week in that loss to Arizona, I can't expect them to go on the road and start blowing teams out. With the Falcons and Bucs playing well, New Orleans better not keep slipping. Buccaneers +4

Baltimore @ New England The Ravens looked great last year in the postseason dismantling the Patriots in Massachusetts. Now the Patriots try to get revenge, a week after trading receiver Randy Moss to the Vikings. New England will display their newly revamped offense sans Moss. The Ravens 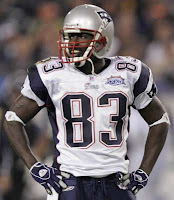 are going to go after the Patriot secondary, the same way the Jets did earlier this season. Their offense got off the mat last week scoring 31 points as running back Ray Rice ripped off 133 yards. When the Patriots backs have been against the wall, they've normally opened up in these games. Bottom line, Baltimore's offense hasn't been as impressive as I thought going into this season. They've got weapons all over the offense and still have just looked average. Still Ravens +2.5

Detroit @ New York (Giants) I've got to admit, I didn't buy the Giants after their victory against Chicago, but they did dismantle the Texans defense a week later. Now they've got some respect. The Lions on the other hand have impressed me every week , despite their record. After the shocking garbage loss they suffered in week 1, the Lions have kept improving despite losing their quarterback going on five games. With Shaun Hill under center, the Lions have been alright and actually are ranked 6th in the league in passing offense per game. They'll need all that against the defense the Giants bring to the table. Still, show this Lions squad more respect than making them 10 point dogs, they come to play. Lions +10

Atlanta @ Philadelphia I'm interested to see how Atlanta does going on the road against a good team. The Falcons are 4-1 but haven't beaten anyone impressively. I expect this game to go just like their loss to Pittsburgh in week 1. The Falcons have rushed the ball well but are

still waiting for Matt Ryan to get better and avoid the untimely turnovers. For Philadelphia, they've got to get LeSean McCoy going, he's played well but the Eagles need for him to both catch passes out of the backfield and also move the ball through the ground game. The 3-point line here means everyone thinks Philly and Atlanta are very close to even and I'm in agreement. Eagles -3

Cleveland @ Pittsburgh Big Ben is back, the Steelers are 3-1 and coming off a bye week. I love the Steelers in this game even if Cleveland has been scrappy this season. The Steeler defense has been awesome against the run. Giving Colt McCoy his first start as an NFL quarterback on the road against this defense just seems cruel. Ben Roethlisberger may take a couple of quarters to get his legs under him but I expect the Steelers to do a ton of rushing the football and playing field position. Take the Browns +13.5, this line is very high and for teams who like the run the ball a ton of clock is going to get eaten up rather than points put up on the baord. Browns +13.5

Oakland @ San Francisco The 49ers have this week to get off the mat. They haven't won a game, have lost every way you can, and if this team starts to give up on Mike Singletary, you can kiss even the NFC West goodbye. Oakland is a team prime for a hangover game after their win against San Diego a week ago. The 49er defense is going to come up big and give them their first win. Amazing that I want to take a team that hasn't won a game and have them give 6.5, but I'm going to roll with it. 49ers -6.5

New York (Jets) @ Denver The Broncos are a strange team. They go from looking solid against the Titans and Seahawks but look awful against Baltimore. The Jets could win in Denver and really make a statement that they are disciplined enough to win on

the road against a non-hyped up game. Kyle Orton for the Broncos has played really well this season averaging over 340 yards through the air per game. Take the Broncos at home getting three points. The Jets secondary isn't fully healthy and Josh McDaniels is going to have that offense prepared to play against Rex Ryan's defense. Broncos +3

Dallas @ Minnesota How injured is Brett Favre?!? Last season when the Vikings defense and Favre were on track, they steamrolled Dallas in the postseason. They've added Randy Moss and that has to put fear in the Cowboys defense, a defense that has let up a bunch of huge plays through the air against Tennessee and Chicago in recent weeks. I love picking the Cowboys here but it's not that easy. The Cowboys aren't rushing the ball and are having a tough time blocking for Tony Romo, as seen in both of their last two losses. I'm taking the Vikings against my will. Vikings -1.5

Indianapolis @ Washington Indianapolis has way to many running backs hurt and it's putting a ton of strain on their offensive line and on their receivers. Washington on the other hand has looked terrific at home after beating Green Bay and Dallas while coming up short against the Texans in week 2. If Indy's offense struggles as much as they have against both Jacksonville and Kansas City in the last two weeks, they may have just as much trouble with the Redskins. I'm taking Washington +3, this is a team looking to put together a couple of statement victories after beating Philadelphia and Green Bay in back-to-back weeks. Redskins +3

Tennessee @ Jacksonville Who cares? Worst scheduling I've ever seen, there are about six more games I'd rather see in this time slot, at least! Jags +3, because I'm done with this!
Posted by Lynchy at Saturday, October 16, 2010