[No, I haven't forgotten about baseball completely . . . just temporarily]

If you're going to win The Fall Classic this year, better get in that cage. The arms being displayed this October are no joke. As the LCS begins and postseason play resumes, the pitching performances thus far have been flat out dominating. With Tim Lincecum, the Giants ace who tossed 231 strikeouts in the regular season, squaring off against Roy Halladay, just the second pitcher in the history of major league baseball to throw a no-no (in his first playoff start), to open the National League Championship Series, you better get all in!

This is The Impact Four

Jonathan Sanchez, Gaints Starter - Scheduled to start Game 3 back in San Francisco, the Giants slated #3 starter Jonathan Sanchez really came on this season in his third as a fulltime starter. For the second consecutive season Sanchez increased his strikeout total by more than 20 from the previous season, totaling 205 k's in 2010. Dropping his

earned run average by more than a run and making 33 starts this year, Jonathan Sanchez has really given the Giants another starter to pair with ace Tim Lincecum for years to come. His impact RIGHT NOW: If Lincecum is going to oppose Doc Halladay, who for all intents and purposes has been the best pitcher in the majors this season, Sanchez is going to have to keep the Giants afloat and get them a home win under their belt in game 3. Doing just that against a former Series MVP in the Phillies Cole Hamels won't be an easy task. Thus making the 27-year old lefty all that more important to the World Series hopes of the San Francisco Giants. [As of Wednesday night, Sanchez may get bumped up to Game 2.]

Brad Lidge, Phillies Closer - Lidge has been awfully good throughout the second half of the season. He's Charlie Manuel's closer, even when Lidge was at his worst through last season, Manuel still called on him during the Phillies run in 2009. Then when Lidge was struggling earlier this season, it was Manuel who hung

with him again. After his early season struggles this year, Lidge has been as good as anyone. Converting 17 of 18 save opportunities from August on, with a stifling earned run average south of 1.00, Lidge is as important as any starter or closer remaining. His impact RIGHT NOW: With runs being at a premium in the NLCS, given the starters taking the rubber on both sides, Brad Lidge won't be able to stumble. The Phils are going to need Lidge to continue his 2010 performance and also dial back to his amazing 2008 performance where he posted seven saves in the postseason.

Andy Pettitte, Yankees Veteran Starter - If Pettitte goes Game 2, that's saying something. With Rangers ace Cliff Lee scheduled for a 5-day rest start in Game 3, the Yankees are going to have to throw that one away. Lee is 6-0 in his postseason career with an era of 1.44, deal with it. Back to Pettitte, the 15-year veteran needs to either give the Yankees a commanding 2-0 lead heading back 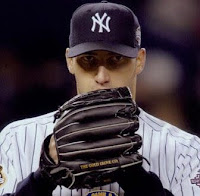 home or avoid a 0-2 hole. More inside the numbers, the other Yankee option is to go with Phil Hughes who pitches well on the road, away from the blistering New York media. Whichever way they decide to go, Pettitte is very important. His impact RIGHT NOW: In his long career Andy Pettitte has taken the mound 41 times as a starter including five starts last season, four of which he won. His last postseason loss, 2005. Andy Pettitte is the anchor of this staff, he brings more experience than any pitcher remaining in the postseason, except for his closer.

C.J. Wilson, Rangers Starter - When we won't get to see the Rangers ace Cliff Lee till Game 3, someone is going to have to step up on their staff. In his first year as a starter, the Rangers have found something in Wilson. The 29-year old lefty had a good season posting a 3.25 earned run average and striking out 170 batters.

In his first postseason start, Wilson led the Rangers to a game 2 victory pitching 6 and a third allowing no earned runs and walking only two. His impact RIGHT NOW: It was Wilson who manager Ron Washington was going to had Lee not been able to get through the early innings in Tuesdays Game 5 ALDS against the Tampa Bay Rays. If Wilson can battle Sabathia and the Yankees into the late innings, it'd go a long way to getting a real jump in the ALCS.

We all know Sabathia, Lincecum, Doc, & Cliff Lee are going to tear up the LCS's, but you can bet these four are going to have their say as to who advances to the World Series.

For more Lynchy find us on Twitter.
Posted by Lynchy at Wednesday, October 13, 2010