Month till the Madness

So what the Patriots choked in Super Bowl XLII, life goes on. Now that the football season is officially over and there is one month until the Madness of March it has probably left you pigskin loving, wife avoiding on Sundays, animals out of control. I have the solution: NBA HOOPS now before you roll your eyes and select that tiny (X) in the upper right hand corner of your browser maybe you could give it a shot. The Celtics, Pistons, Magic and Cavaliers are all title contenders and play in the Eastern Conference. As for the Western Conference, 10 of 15 teams are above .500 and we are closing in on the half way point in the season. Your usual contenders, Dallas, San Antonio, and Phoenix are all above 30+ wins. The upstart Hornets are tied for the Southwest division lead at 33-15 and Carlos Boozer has led the Jazz to a 32-18 start which is good enough to be the Northwest division front runner. Portland has stunned the NBA at 28-20 and they are playing without top draft pick Greg Oden who is out for the season with a knee injury. Kobe is still in L.A. and they have just added Pau Gasol for a case of the new Gatorade (G2) which will catapult them to everyones favorite playoff team come the spring. Without mentioning the NBA's most exciting team, the Golden State Warriors, this is a small sampling of the most wide open field of NBA title contenders since Jordan retired, the second time (after ring #6). So I ask you, WHAT'S NOT TO LOVE?!?!? Not satisfied?

The New Orleans Hornets, as I previously mentioned are currently tied for the Southwest division lead and at 33-15, have the 4th best record in the 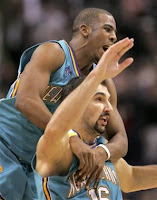 entire league (behind Boston, Detroit, and Phoenix). Not only are the Hornets winning at home, they currently are 17-7 on the road and within the wild wild west are 24-11. Led by the NBA's top non-canadien point guard, Chris Paul, who in only his 3rd season in the league is averaging a mind blowing 20 points and 10 assists a game (ACC shout out) Peja Stojakovic and Bobby Jackson, have landed in Nawlins' with Peja getting his 15 a night from behind the arc and Jackson now in his 10th season is anchoring the Hornets bench playing a solid 20 minutes a game. Tyson Chandler has found a home with the Hornets and is averaging a double-double a night. The real surprise in the "Bayou" is 4th year forward David West who has added six points and three rebounds a game to his career average of 13 points and 6 boards, amounts to 19 points and almost 10 rebounds a game. The Hornets may be the biggest surprise playoff threat because of their great guard play from Chris Paul and Morris Peterson (Flint, Michigan stand up) Here is a team that can play with the excitement that Golden State brought to last years playoffs.

believer. Here is what you have to watch for: Amare no longer has to bang with the Western Conference centers Shaq can take care of that and allow Amare to play his style of basketball, face toward the hoop playing from the elbow in. Come playoff time is when it pays off: Phoenix will be forced to play a half court game with teams like San Antonio, Houston, and Utah who all can slow the game down and force your big men to take on theirs, Shaq is still bruising in the low post. The last time O'Neal was out to prove people that he could win without Kobe, he did. Look for him to show Riley that he still had gas left in the tank. Tell me you aren't excited about Shaq, Nash, and Amare? At least a little anyway.

The new look Lakers have become by far the most interesting franchise in the NBA if you ask me. A week ago they virtually dumped Kwame Brown and got Pau Gasol 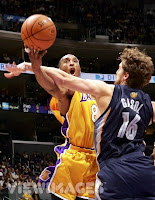 , thats like trading a cheeseburger for a filet mignon. I don't think that Pau Gasol is as good as everyone says he is but the fact that they gave up nothing for him and still kept their depth shows the Lakers want to put a cast around Kobe. With Derek Fisher back in L.A. this season it adds veteran leadership and someone with championship pedigree to your backcourt, depending on how effective Bynum is after he gets back from injury the Lakers could be the #1 contender heading toward the playoffs. The way Bynum played before his injury proves that the Lakers knew what they were holding onto him last summer when Kobe was begging for help. My applause to the management for not caving to the star, even if you were willing to sacrafice his prime.

I was the first one to tell you that the Cavs making it to the Finals last June was a fluke, well I was wrong and I've been wrong before. 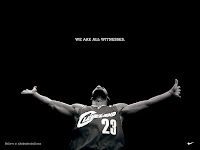 LeBron (no need for last name) has made me think twice for the first time in about 3 years who the best pound for pound player in the NBA is (I still think it's Kobe, but I thought twice) LeBron seemingly can take over any game and win any game on any night by himself. Now in the gold chain wearing Jordan period of his career LeBron is playing with literally a bunch of scrubs and the Cavs are still 27-21. Twice in the past two months LeBron has finished a fantastic fourth quarter and then told the media it was because someone in the crowd pissed him off, he has that Reggie Miller mentality with the Jordan "I can beat you on any day, by myself" attitude. The Cavs in the playoffs are better than good because of one man and his name is King James. (and if you don't think he'll be playing for the Brooklyn Nets in two seasons, your crazy)

If the over exposure of Paul Pierce, Ray Allen, and Kevin Garnett hasn't hit your life yet, 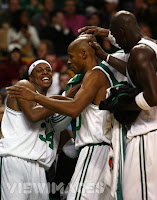 you've gotta be living in a cave. Here is the deal: best record in the league, mentioned in the same sentences as San Antonio & Phoenix, and are packing the garden part II every night. 3 statements I never thought I'd say in my lifetime, given the fact that I had slit my wrists last spring when I found out that the C's woudln't get Oden or Durant. The bench is by far the most important thing come playoff time, how far this C's team goes into the post season will depend on great play from Glen Davis, Tony Allen, James Posey, and Eddie House. Do I think they are the #1 Contender? 1 or 1A . . . undefeated against the Western Conference so far but will have to advance in a seven gamer against Detroit: That will be a true contest. Finals back in Beantown? Screw the Patriots that is excitement.

Lastly, you football fanatics don't have much to cheer for in Michigan these days, the Lions suck a** and the Wolverines lost to App. State, even a win over Florida in the Capital One Bowl doesn't erase that nightmare, but hey maybe Matt Millen will trade up and draft Desean Jackson out of Cal, the Lions need another receiver right? Probably holding out for Michael Crabtree next year, I get it.

So after seeing your baseball team flame out in the Series two years ago you really must be in misery, here in New England only our football team chokes. But you do have one thing to hang your hat on: The Detroit Aliens . . I mean Pistons (what?!?! act like you don't think Prince, Rip, and Chauncy look like space cadets) I won't even get on Rasheed, I'm still afraid of him and he has been calm lately. The Pistons are the team in the East to beat until they get broken up, ultra competitive and a deep bench, you can't count them out, even if they did get whipped by Bron Bron in last years Eastern Conference Finals. My dad brought up a good point, imagine had the Pistons drafted Carmelo Anthony over Darko, how many LeBron v. Melo matchups in the conference finals would we have seen in the 10 years?


So your gambling addiction takes a month off until March Madness where you can secretly hide the problem because everyone is doing it. You don't need to sit in front of the television watching 4 hours of Law & Order reruns every night and wondering how you haven't seen every episode yet, tune into any number of NBA games which are nationally televised unlike the NHL and enjoy. The NBA, where the best athletes play. NUFF SAID.
Posted by Lynchy at Thursday, February 07, 2008