Well with football season completed and March Madness on the cusp you would think there wouldn't be all that much to blog about. Your wrong, for the past two weeks I have been so consumed with real life (work, president's day, & campaigning for Obama) and following my sports addiction that this blog, LynchyRightNow.Com, has taken a back seat, unfortunately. From NBA All-Star weekend and the trade deadline, to pitchers & catchers reporting, to all things Patriots, Matt Walsh, and U.S. Senators with entirely to much time on their hands, there is plenty of going in the sports universe.

I know that I've been howling about the NBA for a couple weeks now but seriously why aren't more people excited? Yes, I get it American Idol is (about to lose my man card) kind of entertaining but how can you not be a little excited for the second half of the season? Here comes my final attempt at getting you Idol viewers to tune into something that matters:

coaches go, and acquiring Gasol for Kwame and a bag of donuts is ridiculous. I'm not like those 1980's Celts fans, I never really got to hate the Lakers and NO I'm not going to hate them because Kurt Rambis was a douche, I never saw him play. Just like I don't hate the Mets, I was only 3 when they beat the Sox in the Championship and I'm sure I was more concerned about who was cleaning my diaper back then. I'll cheer for L.A. until they get to the finals, then I've got to go greeeeeen. Bynum comes back strong after injury and you can lock the Lake Show in the finals. Like I said about Lebron, when Kobe wants to beat you, he'll beat you. First athlete since O.J. to get found not guilty errrrrrr, maybe that wasn't the best defense.

2. Who will win the West? This will be the most compelling second half of basketball since the days we'd watch to see who would meet Jordan in the Finals. Chris Paul and city of Nawlins, Kobe & Gasol, Shaq & Nash, Kidd & Dirk, Duncan, Parker, and Ginobli, Yao & Tracy, Boozer & Williams, Byron Davis & The most exciting team in basketball all playing for a shot at meeting either Detroit or dare I say it, BOSTON in the Finals. An entire second half of ESPN games that will be on prime time getting NLDS ratings, WHO LOVES IT? For the first time in weeks I've shut off my mini marathons of Law & Order on every channel, to view a highly anticipated NBA showdown, SUNS v. Lakers. GREAT GAME, I even know women who were watching it, that in itself is amazing, granted they were all 6'4" and could dunk, but who cares. Every time these teams match up against each other you can witness an amazing show, whether it is Chris Paul torching the Mavs, Kobe dropping 41 on the Suns, or Lord Baron of Golden State nailing a buzzer beater to beat the Celts. Get ready for the most exciting time in the NBA in years.

3. This is NOT a league of "thugs." A few years ago David Stern and the NBA knew it had an image problem. Struggling since Jordan's' retirement to put a face on the game, Stern leaned toward what was popular with today's' youth i.e. tomorrows parents with buying power. A more Hip-Hop image and selling the stars as young urban successes with alot of talent for the game of basketball, unfortunately corporate America won't put their name behind that type of brand, its just
the way it is. The NBA went through several years with no real face and numerous bad "press" issues. The Pacers/Detroit fiasco at the Palace in Aubuurn Hills, 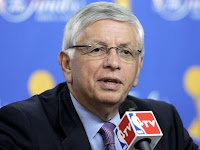 and the Kobe Bryant incident in Colorado, just to name a couple. Stern has done several things most recently to change that, implementing a dress code was a genius idea, at the time players said "WE WANT TO WEAR OUR THROWBACKS and BLING" David stood strong, realizing that players in suits during a press conference and before the game would put money in his pocket, and theirs. Chris Paul, Kevin Garnett, Dwight Howard,Tim Duncan and Lebron James are HARDLY THUGS and most likely one of them will be wearing a ring and doing the talk show circuit, dressed to the nines, in the summer. Stern has made sure that every team participate in outreach programs to help the community in which they play, and brought the corporations back into the NBA. No thugs here, just Ballers. If you disagree, look at the NFL, Pacman, Tank Johnson, Michael Vick, Chris Henry, shall I go on????

ENOUGH ABOUT THE NBA THOUGH: Pitchers and Catchers are reporting

My brother will scroll right past this portion of the blog, he is an avid BASEBALL HATER, not all of us Lynchs' can be perfect. The Boston Red Sox went into the off season with the best roster from top to bottom, and they enter 2008 with the best roster top to bottom, the games most elite pitcher, Johan Santana, is finally playing in a market and for a team that actually matters to baseball fans, and as I left you last fall, Joe Torre enters the Phil Jackson stage of his career. No one really cares about steroid use from Brian Roberts and Paul Lo Duca so why even bother asking them questions about it, to the media it only matters if they once ball washed you, see Roger Clemens and Barry Bonds. We won't avoid 'steroid talk' this spring and summer but we can do everything possible (of which I will attempt to) and talk about things that actually matter in Major League Baseball. So here is my first attempt:

1. Don't sleep on Arizona: The last time the D-Backs had two top tier starters they won the World Series. Their GM is the first off the "Epstein Tree" and has proved he can do the job, just awarded an 8-year contract 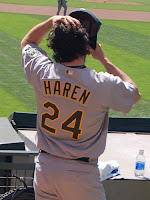 extension I'd say I'm not the only one who thinks so. Adding Danny Haren in the off season to pair with Cy Young winner Brandon Webb gives them a formidable duo to say the least. Haren won 15 games last year in the American League for the Oakland A's, along with a era slightly over 3.00 Haren allowed hitters to hit a mere .244 I'd say that is as good as a #2 you were going to acquire this off season. Among the top 10 in nearly every pitching category in the National League last season, Brandon Webb finished with an 18-10 record and and struck out almost 200 batters. Webb and Haren should provide in excess of 30 wins for the Diamondbacks and with two aces the D-Backs are built for playoff baseball, runs are at a premium with those two on the mound.

2. Manny Ramirez is more than prepared for his contract year in Boston. One look at Ramirez in the spring and you'll notice the hard work he has put in this off season. A notorious hard-worker on his craft, hitting, Ramirez seems to have applied that to getting physically ready for the final year of his $160 Million dollar deal with the Boston Red Sox. While the Red Sox still hold club options for the greatest right handed slugger of the last 15 years, Ramirez seems to be preparing himself not only for a monster year in 2008 but the very likely assumption that he may be a free agent at years end for the first time since the end of the 2000 season. Ole' Manny will reach 500 home runs on his career by the end of May, to go along with that Manny is a lifetime .300 hitter. However the biggest sign that Manny may be headed toward free agency isn't his intense workout, its the new addition to camp Manny, Scott Boras. Here is my bottom line on what Manny will produce this year:

3. Since 2004 newly acquired Mets all-star pitcher,Johan Santana,has started in 33 games each year and pitched over 219 innings each season. What does that tell you? Other than the fact that yes, he stays healthy, it also tells you there is alot of innings logged on that arm, all before he was a New York Met. Widely considered as the best pitcher in baseball, Johan is a strikeout machine averaging 245 per season over the last 4. John Maine, Oliver Perez, and Orlando Hernandez hardly put fear in the eyes of opposing hitters yet a supposed healthy Pedro Martinez, who took it easy this off season, taking time out to participate in cock fights while resting in the Dominican, and of course Johan Santana aim to lead the Mets to an East Division title, after there mind-blowing collapse last year. LOOK, until the Mets actually "show me" I won't believe it either, like their New York counterparts, the Mets are great at putting talent on a team, now can one of them win a championship is the question.

I've got to sound off on "Spygate" and it won't surprise you where I stand based on my political views. If you consider "The Commander and Chief" the boss to all State Representatives and Congressmen then it is no wonder why they are both acting the way they are. If you told me that my boss was being replaced in the fall and people were actually campaigning for her job then I too would find random sh*t to do that would fill my hours of free time. Enter: US State Senator, Arlen Spector, or should I say, Philadelphia Eagles fan, Arlen Spector. 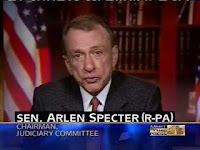 Like the rest of Philadelphia sports fans, of course your upset, because your teams suck. I'm from New England where champions are like buses, one comes along every hour so I can't imagine how much pain you are but I can assure you of one thing: Ted Kennedy wouldn't have a job much longer if he spent his days interviewing commissioners about SH*T THAT DON'T AFFECT HIS VOTERS. Arlen, allow me to break it down for you: I don't cheer for the Pats, I'm a Cowboys fan so you can call me unbiased on this
one

1. The Eagles never won a championship because the only help you ever got McNabb was T.O. who subsequently got you to the big dance, which you lost, and then you refused to pay the man for it. Owens risked his entire career to make sure that he played in that Super Bowl, and he played GREAT, unfortunately you lost and were prepared to play hardball with the one guy who actually LIKES when an entire city hates him. Arlen wake up you just got beat, video cameras or not.

2. Matt Walsh was fired from the New England Patriots, so why wouldn't he have bad things to say about his former employer? Have you ever met a guy who got fired and said "yes, it was my fault they treated me great and I just wanted to stick it to them" NOOOOOOOOOOo YOU HAVEN'T because it doesn't happen. Like a scored lover they are going to make things sound WAY worse than they actually were. If Mr. Walsh was so intent on screwing the Pats why didn't he just send the tapes the day after he got sh*t-canned? Like Brian McNamee, Walsh is saving evidence? The reason why Brian McNamee is a bad witness isn't because he is lying its because it has taken him 7 years to say anything and he only did when it would benefit him. Arlen, again WAKE UP and go do some work that actually impacts the country.

Only two points this time, the entire topic gives me a headache.

That is what I have for now, and I promise to be more consistent with the blogs during the week. Till next time, COME STRONG OR DON'T COME AT ALL . . .
Posted by Lynchy at Thursday, February 21, 2008