The Washington Redskins and Robert Griffin may want to seriously consider a name change after the 'Skins dismal 2013 season. Just two years ago, almost to the day, Robert Griffin was hoisting the Heisman Trophy, now he's being benched with three regular season games left in his sophomore campaign in order to protect 'the future' of the franchise. 'Skins head coach Mike Shanahan won't make it out of this season with his job still in tact, that much is clear. The quarterback who was expected to be everything and then some after his rookie season will now have to prove himself again to be in competition with his fellow draft 'classmates,' Andrew Luck and Russell Wilson who will both be leading their respective franchises into their second straight postseason appearances. Ask any 'Skin fan you can find, eight months to prepare for 2014 isn't going to be the solution for RGIII and owner Daniel Snyder. What will?!? 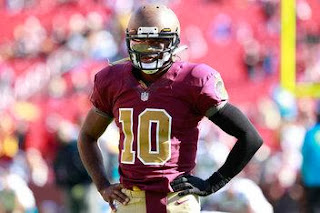 1. A Defensive Coordinator who is going to be part of the solution not part of the problem. Between his blowups with other assistant coaches and his own players, current defensive coordinator Jim Haslett is not that guy. The Redskins defense is a laughing stock, they can't cover or rush the pass, good luck in a league where 34-year old journeyman quarterback Josh McCown looked like f*cking John Elway in his prime against the Dallas Cowboys this past Monday night. This is an offensive league folks, you better find a way to play defense if your plan is to compete for a Super Bowl. Offensive guru and Super Bowl winning head coach Sean Payton knew to bring in defensive mind Rob Ryan to help his Saints get back to where he thought they should be. Pete Carroll in Seattle has done everything he can to ensure his defense brings the pressure and let's stay out west, the 49ers and all-world pass rusher Aldon Smith aren't anything to scoff at either. If I were running the 'Skins, my first calls would include a short list of Virginia Tech defensive coordinator Bud Foster, Pittsburgh Steelers defensive coordinator 'in waiting' Keith Butler, and redemption project Steve Spagnuola.

2. A Head Coach who is comfortable bringing in people to surround himself with talent in order to make his job easier. How has Marvin Lewis lasted so long in Cincinnati? Mike Zimmer. How has Mike Tomlin been so successful in Pittsburgh? Dick Lebeau. Why has Dan Snyder's last several choices as the head man in Washington had a rough ending? He picks guys who are mostly in it for themselves. All due respect to Kyle Shanahan and what the 'Skins did last season, but let's be honest you don't move all in with your son as offensive coordinator if you don't think he'll at the very least listen to Y-O-U. Clearly Broncos interim head coach Jack Del Rio is prepared for another NFL head coaching job, his leadership during head coach John Fox's medical leave surely made people start to think of Del Rio in that role again. Recently fired Texans head coach Gary Kubiak shouldn't be out of work for too long, he may have done what he could in Houston and it was time for a change, but that doesn't mean he can't defer to assistants and still lead a pretty solid team. As long as the next head coach isn't a dominating personality, like Shanahan the 'Skins may be okay. Snyder, that means NO JON GRUDEN! But maybe a Jay Gruden . . hmmmmm.

3. Lose the name. I'm all for standing up for what you believe in. I'm all for not giving into public opinion. But even Anthony Weiner has to look into the mirror (without a camera phone) at some point. American Indians are offended by the name Redskins, as they have a right to be. There are 50-names I could think of off the top of my head which would pay respect to Native Americans and keep the spirit of the 'Redskins' alive. The Washington Brave, The Washington 'Skins, anything would be better if a large section of people feel as though your current name is insulting, which they're probably right, you ought to just change it.

Is all of this going to help you if you've picked Robert Griffin as your fantasy quarterback next season? Probably not, but at least it'll prevent Kirk Cousins from selling me a Subway tuna melt 18-months from today.
Posted by Lynchy at Thursday, December 12, 2013