Out Of Hibernation; NFL Is King

How perfect is the NFL 'machine'? No one does it better. The NFL Draft pulls down better television ratings than some World Series games, better than NBA playoff games (in the same time slot), and I'm sure it'd even give the series finale of Friends or Seinfeld a run for its' money. Why? Because you can't write the story lines better!

In some years, the fact that the New England Patriots selected the heir apparent to their 3x Super Bowl winning quarterback in the second round, would be THE storyline as the three day draft festivities were winding down. In some years, the Minnesota Vikings trading back into the first round to select former Louisville quarterback Teddy Bridgewater, who at one time was considered a guaranteed top-five selection, would be enough to lead the news cycle. However, in 2014 - those story lines don't even sniff the first few thoughts about this NFL Draft. 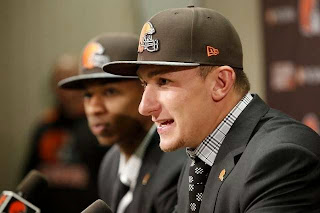 It's hard to believe there has ever been a louder buzz coming out of Radio City, which has hosted the likes of Ray Charles, Frank Sinatra, and Ella Fitzgerald, than when the most magnetic star in the game was anxiously watching himself get passed over again and again in the first round. I'm sure that current Packers Super Bowl winning quarterback and 24th pick in the 2005 NFL Draft, Aaron Rodgers, knew what that felt like. There isn't enough half smiles, fake table conversation, and bottles of water to swig on to make that time go by faster.But when 2x Heisman finalist Johnny Manziel finally got the phone call that he was headed to Berea, Ohio as the Cleveland Browns had pulled off a trade to get into the first round and select him, the NFL Draft exploded! Say what you will about Manziel's size, his background as the grandson of an East Texas oil baron, or his arrogant persona which reached new heights this past weekend, the fact remains that 'Johnny Football' hysteria is going to breath life into Northeast Ohio, life which hasn't been the epicenter of the sport universe since its' native son Lebron so famously took his talents to South Beach.

Bottom line; The Browns need to be seriously given props to what they accomplished over the past weekend. It would have been very easy for them to add Manziel at #4, but they had a plan, stuck to it, and executed to perfection. Traded the #4 pick for the #9 pick, while snatching a 1st round pick in the 2015 NFL draft through Buffalo. Complete steal. Cleveland wanted Justin Gilbert to place across the field from Joe Haden and needed to find a way to move back to take him, they did that while adding what is most likely going to be a top 10-15 selection a year from now, maybe better. Then they sold their #26 pick they had landed by trading Trent Richardson last season for the Eagles #22nd pick and landed the quarterback they had as their #1 quarterback on their 'big board.' Find a team that had a plan which was executed better than theirs? Bravo.

How is the Manziel story line topped? The co-SEC defensive player of the year and first openly gay NFL draft prospect, Missouri's Michael Sam, was drafted #249th by the St. Louis Rams. What the kid did, during the draft process none the less, was nothing short of brave. Now comes the difficult part of life in the NFL, he's going to have to go out there and make that roster. St. Louis Rams defensive coordinator Gregg Williams is one of the most creative coordinators in the NFL and is superb at identifying talent. Michael Sam is really going to have to prove that he is talented enough to play on one of youngest and most explosive defenses in the NFL, that's not an easy task for anyone, let alone a player who is going to have more distractions from the media storm that will descend upon Rams training camp.

Bottom line; Look, he was one of the best defensive players in college football's most elite conference last season. A conference that put 48 additional players into the draft this year. He isn't a bad football player or a non-deserving football player. I just hope he'll be able to compartmentalize the media aspect of this and show every doubter that he deserves a spot on that roster, and they'll be other doubters that we won't hear from but will have their opinions.

I used to really, really, look forward to the Oakland Raiders draft selections. From Alabama linebacker Rolando McClain, Maryland wide receiver Darrius Heyward-Bey, to LSU quarterback JaMarcus Russell, I was always excited for some drama and unpredictability. But you aren't getting that from Oakland anymore, or at least it seems that way. The Raiders went out and added some real value this off-season bringing in Antonio Smith from Houston, Justin Tuck from New York, and Lamar Woodley from Pittsburgh, all successful players in very good defensive systems. Then through the draft they brought in linebacker Khalil Mack who is amongst the most talented players in the entire draft process. It's clear they've addressed their defensive needs, and are moving away from errors of the past.

Bottom line: We have got to give Oakland a ton of credit, their second round pick Fresno state quarterback David Carr has a huge upside but unlike other franchises they don't need to play him right away because they brought in veteran Matt Schaub to do just that and take the pressure off of Carr as a starter. If Oakland continues to improve and make moves like this each and every draft, you can bet they'll make that AFC West very interesting.

The draft is a huge lottery, you never know what is going to pan out, but it is in fact another example of why the NFL is king when it comes to entertainment. No secondary league survives the competition, they continue to bring in fresh new bodies every year from one of the most unfair feeder systems around, and from the draft to mini-camps to training camp, the NFL dominates even in the off-season. There is a reason why we refer to World Series as baseball's Super Bowl, or maybe we should start doing that . .