See You In The Rafters

June 24th, 1998 - I turned 15, stopped believing females had cooties, began to thumb through my mother's J.C. Penney catalog (bra section) a little slower, and the same day our Boston Celtics would select a small forward from Oakland, California who played his college ball in Lawrence, Kansas with a natural chip on his shoulder. 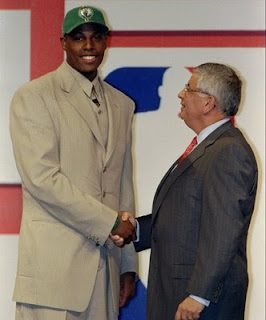 That player, now 15-year NBA veteran with well over 1,000 games started in Celtic green, a top-20 scorer in the history of the game, an NBA Finals-MVP in hand, has written himself into Celtic lore, the most storied basketball franchise in the game. What more could we have asked from Paul Pierce? Nothing.

I grew up with Paul Pierce. His 15-year career has spanned my years in high school, college, and beyond. In the winter/spring/summer of the 2001-2002 NBA season, a group of friends and I would travel from our freshman years at various institutions of higher learning in the northeast and meet in Boston to see Paul Pierce lead a Celtics band of misfits including the 'Original Creation' Eric Williams, 'Batman' Tony Battie, and fan favorite Antoine Walker to their first Eastern Conference final in seven years. It was then I learned of the true lion of a man that Paul Pierce was.

Down 21-points heading into quarter number four of a tied-up (1-1) conference final, Paul Pierce dropped 19 of his 28 points that night and led the Celtics on a historic comeback toward victory. Pierce stood on the scorers table after the game and just electrocuted the sold out then FleetCenter. I looked to my left as one of my friend's held a ceiling tile he pulled out from the last row of the arena under his right arm, to my right was another friend of mine with Adidas 'shell-tops' spray-painted Celtic green, and there was Paul Pierce running on pure emotion from the legions of Celtics fans roaring around him. That was my Pierce moment, I have the ticket stub to this day, and forever in my mind will be that moment. To me, that was whatever moment my father used to talk about Larry Bird. That was the moment I'd tell my future children, I was on a straight high that no drug could provide, even writing this makes the hair on my arms stand up.

On a personal clip; That same Spring that my high-school friends and I would come back home to hit-up Celtics playoff games, I had experienced the first real loss of my life with the passing of my grandmother, a rock of a woman, Shirley Lynch. So yes, 'The Truth' played a part in both helping me cope with loss but also helping me move on with life.

In 2005, prior to the annual NBA Draft, despite that Pierce was rumoured to be tired with the traditionally young nucleus the Celtics wanted to surround him with, it was Pierce who blocked a potential trade that would have sent him to Portland in exchange for the third-pick overall and veteran Nick Van Exel, a pick which was suspected to ultimately have landed the Celtics current all-stars Deron Williams or Chris Paul. Pierce would ask Celtics brass that they do not trade him because for his frustrations he desperately wanted to remain a Celtic for life, and be part of that team that would eventually raise Banner 17. Now there is a good chance that I'm mis-remembering things, but to me, this is one of the moments that ultimately changes my history as a Celtics fan, so I tend to lean on the side of story than fact. Either way, Celtics fans walked away with a player who had been in a Celtics jersey longer than anyone they remembered.

Then came the summer of 2007. In a series of moves made by general manager Danny Ainge, the Celtics would quickly turn around and change the next six-seasons of the history of the franchise, six-seasons which would outline and define the career of Paul Pierce as a true Boston Celtic. The Celtics would mastermind two-trades, for future hall-of-famers Kevin Garnett and Ray Allen. The 'trio' of Pierce, Garnett, and Allen would then lead to a historic turn around by the Celtics from a 24-win season in 2007 to a 66-win season a year later, and ultimately an NBA Championship, the first for the franchise since 1986. There are moments during that run that are so personal to me that I can't do justice in words, you'd have to see it on my face to believe how awesome they were. 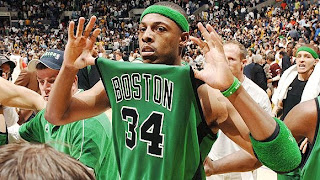 I was at a Boston Red Sox Sunday afternoon game on May 18th, 2008, still on a high from a World Championship won the previous fall. With a Game 7, of the Eastern Conference Finals looming for my Boston Celtics, I really didn't want to got to a regular season, Sox vs. Brewers game. Just innings into the game, we bailed, and decided if we can't get into the TD BankNorth Garden, worst case scenario we catch the game The Four's. A hot cab later, I stood in front of the Celtics ticket-office with a man explaining to me that a quarter into the game, best he could do was $240.00 a person, and he'd get us into a luxury box, but don't expect anything but the seats. Done. I was going to catch Paul Pierce battle for his shot at an NBA Conference Finals, again.

To me, that day will be trapped in time. The games most talented player, LeBron James, in his fifth season as a professional, would be in the battle of his career at the time. With future Hall of Famers Ray Allen and Kevin Garnett taking back seat, Paul Pierce would assume the driver's seat vs. LeBron James. Pierce would go toe-to-toe with LeBron, point after point, play after play, you weren't beating him, in the house he helped build, on that day. I again allowed the hair on my arms to stand-up, remembered that day in 2002, years earlier, when Pierce stood at the apex and let you all read the name on the front of his jersey, not the back.

So personal to me, that moment eclipses the moment in which Pierce out dueled legendary Laker Kobe Bryant in the NBA Finals weeks later and led the Celtics to a 17th NBA Championship, and an NBA Finals MVP to boot. That's how deep his career runs with me. My father and brother can talk about Havlicek and Bird, but can't sniff what I've seen with Paul Pierce.