Happy New Year! In just a few days we're tumbling right into the Wild Card Round of the NFL postseason. Three rookie quarterbacks, three of the games premier rushers, the most elite receiver in the AFC, 'discount-double check,' and of course Joe Flacco. No rest for Minnesota and Washington, both punching their postseason tickets on the final day of the regular season. No time to recover for the reeling Houston Texans who watched their 1st round bye slip away in Indianapolis this past weekend. They've all got to turn around and get right into it, and so are we.

Cincinnati Bengals At Houston Texans (4:30 PM Saturday - 1/5) The outcome of this one will be completely up to how the Texans respond to losing both the top seed in the AFC & the previously mentioned first-round bye on Sunday. If the Texans put everything behind them and get back to being the team that was beating Denver, Baltimore, and Chicago early in the season, then a game in which they don't struggle against Cincinnati would help them regain their confidence. However, if they allow Andy Dalton, A.J. Green, and the Bengal offense to do what they want as New England, Indianapolis, and Minnesota (all playoff teams) have done over the last month, then they'll be just another team who just can't get it done when it actually matters.

Our Pick: Don't take the Bengals lightly, they aren't just the lucky team who gets a Texans team on skates. The Bengals showed something to us all when they won at Pittsburgh just two weeks ago with their playoff lives on the line. The Texans really haven't looked good since mid-November. It just looks bad, the blowout losses to Green Bay and New England paired with that loss in Indianapolis and we really like this Bengals
defensive line to get after it. Bengals +4

Minnesota Vikings At Green Bay Packers (8:00 PM Saturday - 1/5) With four wins in December, everyone knows the Packers are preparing themselves for the playoffs. Even free-agent to be Greg Jennings, back from injury after missing eight games, is looking solid after a 120-yard performance in the regular season finale. That being said, their defense just got gashed by Adrian Peterson

for 199 yards rushing on 34 carries on Sunday. Yes he was chasing a record, and yes he was in front of a Metrodome crowd that was rocking, but the Vikings rushing attack swarmed Green Bay again and again. If the Packers want to make another deep postseason run, they're going to have to force young Viking quarterback Christian Ponder into mistakes that they can convert into points on the board.

Our Pick: Ponder is going to have to be play near flawless and stay away from getting rattled while playing a postseason game in Green Bay. The Packers super-bowl winning quarterback Aaron Rodgers has stayed virtually under the radar this entire season. He's recorded more touchdown passes than both Brady and Manning, with no rushing attack to boast of, and an offensive line that has allowed him to be sacked the most in the NFL this season. Still we never mentioned him for MVP. Rodgers rolls and so do the Packers. Packers -7.5

Indianapolis Colts At Baltimore Ravens (1:00 PM Sunday - 1/6) If not for the Texans, we'd be talking about how horrible the Ravens have looked going into the postseason. They've fired their offensive coordinator, turned the play-calling over to a first-time play caller, lost four of their final five games heading into the postseason, and took starting quarterback Joe Flacco out so early in Sunday's game to get rest, that we don't even know what to expect from him. On the other coin you have the Colts. Galvanized by their head coach Chuck Pagano's season-long battle with cancer, the Colts have nearly everyone in this country rooting for their season to continue. Rookie quarterback Andrew Luck has led this Colts team to an 11-5 record, ten more vicotires than they had a season ago.

Our Pick: This dream story ends for the Colts, Andrew Luck, and Chuck Pagano this week in 'Charm City.' The Baltimore defense doesn't miss opportunities and in his rookie season Andrew Luck has thrown eighteen intereceptions while watching opposing defenses drop another seven! In the postseason, turnovers make the difference. Unless Andrew Luck can keep from turning the ball over, I don't see how Indianapolis' 29th ranked rushing defense is going to be able to contain Ray Rice. Baltimore wins, but won't cover. Colts +6.5

Seattle Seahawks At Washington Redskins (4:30 PM Sunday - 1/6) No team is as hot as the Seahawks and their rookie quarterback Russell Wilson. Wilson and Co. have won their last five straight and seven of their final eight, and are doing it in convincing fashion. The problem is, Seattle won't be able to play any games in the postseason in the Pacific Northwest. The Seahawks finished the 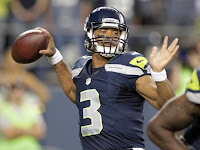 regular season 8-0 when playing at home and just 3-5 when playing on the road. Now headed to Washington in front of a crowd that is more than excited to be there, it's going to get real tough for Seattle, especially after seeing them run all over Dallas last weekend.

Our Pick: As exciting as RGIII has been this season, he's banged up and not the player that was barn storming the NFL earlier this season. The Redskins coaching staff has their work cut out for them if they think they're just going to stop power running back Marshawn Lynch and sew up a victory. The Seahawks are the favorite, despite tehir W/L record away from Seattle, that just goes to show you how much respect they are getting around the league and from fans. Russell Wilson is smart and staying away from interceptions and mistakes, I'm confident he's going to win the battle of the rookie quarterbacks. Seahawks -3

For more Lynchy, find us on Twitter!
Posted by Lynchy at Tuesday, January 01, 2013