Before The Big Dance

With everything out of the way and nothing lying in front of us but The Big Dance between (1) Notre Dame and (2) Alabama, there is still some clearing of the air that needs to be done. From coaches thinking about leaving to coaches doing some leaving, from players on the rise to players at the celing. As a mixture of the NFL and the NCAA collide . . .

Is Andy Reid in KC a wise choice?

Bengals head coach Marvin Lewis has survived not one but two four-win seasons, with his illustrious 79-80-1 head coaching record in play, even he is held in somewhat high-regard amongst his peers. To answer your question however, I absolutely think recently (as recent as Monday) fired Eagle head coach Andy Reid is a safe move for the Kansas City Chiefs. For every Pete Carroll and Jim Harbaugh, there are twenty Steve Spurrier's and Nick Saban's whose coaching styles just don't work at the next level. Caveat Emptor on Chip Kelly.

Was O'Brien ever leaving Penn State?

6'4" 212 lb. Christian Hackenberg is the consensus top quarterback recruit in the country and Penn State is coming off an 8-4 season, so no, I'm not surprised that first-year Nittany Lion head coach Bill O'Brien isn't leaving Happy Valley for Cleveland. Oh, and that's be the biggest a**hole jump by a head coach in the history of collegiate athletics, especially after Hackenberg and a dozen-or-so other recruits agreed to take O'Briens word that he was at State College of Pennsylvania for the long haul. 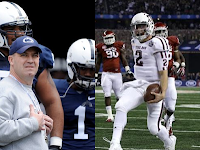 After the Cotton Bowl are we finally fans of 'Johnny Heisman?'

Aggie super-quarterback Johnny Manziel may not be next-level, but he's pretty damn good at this level. The answer is yes, we are definitely fans of Manziel at LynchyRightNow. Look, you'll hear it more than once over the next few days, Manziel didn't miss a beat from the moment his 'star' took off on the night of December 8th to the moment he strolled onto the field at Cowboys Stadium on Friday night. He's as advertised. He's a leader. He's flat out exciting to watch. Manziel torched the Oklahoma Sooners in a 41-13 laugher. Two passing touchdowns, two rushing touchdowns, over 500+ yards of total offense, all against a legitimate Top 20 team from a BCS conference. Now just one question remains, over-under on additional Heisman Trophies?

Which player improved his NFL stock most during 'Bowl Season?'

This is a two-way tie for us.

(1) Georgia QB, Aaron Murray The under-sized Bulldog quarterback needed to follow-up his solid play in the SEC Championship with a good performance in the Capital One Bowl. His poor play earlier this season on the road against South Carolina, just 11 of 31 passing, coupled with rough outings vs. LSU and in the Outback Bowl vs. Michigan State last season had begun to define Murray as a soft big-game quarterback. Murray walked out of Orlando after throwing five-touchdown passes and leading Georgia to a 45-31 victory over Nebraska with that signature win. Finishing his junior campaign in electric fashion just might push Murray toward the NFL foregoing his final season in Athens. 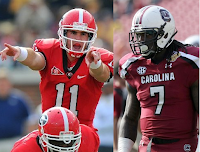 (2) South Carolina DE, Jadeveon Clowney I'm no different than anyone else in terms of rapid reaction. When I say that Jadeveon Clowney's bone crunching hit on Michigan's Vincent Smith in the final minutes of the Outback Bowl was the greatest college football defensive play I've ever seen, I'm serious. Now Clowney is just two-years removed from high school so he won't be eligible to bolt Columbia, SC for the NFL just yet, but barring an injury it's going to be difficult for NFL teams to forget that hit and his play as a sophomore. We firmly believe that the reigning SEC Defensive Player Of The Year and Ted Hendricks Award winner (best defensive end in the country) winner is going to be in line to clean-up nearly every defensive player award in college football at this time next year.

Which college coach would you like for an NFL team?

Without hesitation, it'd be current Louisville head coach Charlie Strong. He's one of our favorite coaches in college football and you can tell the players around him would run through a brick wall for the guy. Strong has coached all over college football from Oxford, Gainesville, and Columbia, to College Station, South Bend, and now Louisville. This is a guy who had to wait his turn for more than enough time to get a shot at running a college football program he could call his own. This season, his third at Louisville, Strong led the Cardinals to a BCS bowl victory over Florida in upset fashion. With next-level coaches, we are looking for two distinct attributes; (1) Can you get buy-in and (2) Are you okay with 'them' being bigger than you? Strong does both of those things.

Finally, Who you got on Monday night?!? 'Bama or the Irish?

I don't see Notre Dame getting waxed that's for certain. You know all the parties, Notre Dame has a very good defense that doesn't give up points easily, in fact they give up the fewest points amongst defenses in college football (10.3 ppg). They're elite, most notably holding the Stanford offense to just 13-points, a Stanford offense which includes 1,500 yard rusher Stepfan Taylor in the backfield. That's the type of attack that the Irish will face on Monday night.

The Alabama offense averages close to forty-points per game with not one but two running running backs who have both eclipsed the 1,000-yard mark. T.J. Yeldon and Eddie Lacy pound defenses changing speeds and driving the ball up field, with a loaded offensive line in front of them. Junior quarterback AJ McCarron remains to play close to flawless football, tossing only three interceptions this season, two of which came in the Crimson Tide's sole loss to Texas A&M. The legend that has become linebacker Manti Te'o will have his hands full leading the Irish defense against an Alabama team that has become pretty comfortable playing on the games biggest stage. I'm going to go against popular opinion, I like the Irish in a tight one!