Welker Out In New England

With unfortunate big-game drops adding up and his free agency looming, Wes Welker may have caught his last meaningful pass from future Hall of Fame quarterback Tom Brady. After six very successful seasons in Foxborough, could it be time the staunch New England Patriots and Welker part ways? We think so.

By the start of the 2013-2014 NFL season, free-agent wide receiver Wes Welker will be 32-years old. Despite playing in 14+ games in each of his eight seasons, the Patriots would still be committing themselves to someone who isn't young anymore. Can you remember the last time the Patriots made a player the highest paid at his position, when they were over 30-years old?!?! A second-straight season tagged as franchise player would push Welker's salary from $9.5 million in 2012 to $11.4 million in 2013. If the Patriots wanted to pay Welker nearly $21 million dollars over two seasons, they would have made that offer to him at the end of last season.

What is Welker's real value?!? True, with Wes Welker the Patriots know what they're getting; 112 receptions, 1,244 yards receiving, and 4 to 9 end zone trips 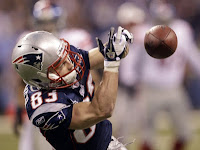 per season. However, let's not pretend like the Patriots and head coach Bill Belichick weren't trying out their 26-year old wide receiver/return man/utility offensive weapon Julian Edelman to fill the Welker shoes for the first three weeks of the seasons, it was obvious. We're not saying that Edelman is Welker, but with an increased work-load, couldn't he be a cheaper similarly effective player?

In 2012, the Patriots weren't really able to display their two tight-end attack with both (under contract) heavy hitting tight-ends Aaron Hernandez and Rob Gronkowski sustaining injuries and missing considerable time this season. Drafting both running backs Shane Vereen and Stevan Ridley in 2011 seems to have worked out and given them a running attack that is pretty solid. An all-world signal caller, healthy pass catching tight-ends and two consistent running backs, wouldn't we all agree that the Patriots offense is not going to be noticeably different without Welker.

All this being said, when it comes to the New England Patriots and their now seven-season Super Bowl drought, is the offense what the organization and the fans should be most concerned about? When mid-season acquisition, cornerback Aqib Talib, goes down in the AFC Championship the Ravens jumped all over the New England secondary. The most dominant franchise of the last twenty years was hinging their Super Bowl hopes on a cornerback they acquired midway through the 2012 season, a cornerback with a lengthy history of off-the-field issues and marginal NFL success. Yet somehow, Wes Welker should be their main priority?