No More Laying In The Cut

He showed very little emotion while dissecting the Houston Texans throughout the first three quarters on Monday Night Football. That was however till just before the fourth quarter with the Patriots up 28-7 on a third down in which future Hall of Fame quarterback Tom Brady pulled down the ball and scampered for a six-yard 1st down run. Brady, all fired up, motioned a first-down and got the nearly 70,000 fans packed into New England's Gillette Stadium rocking. 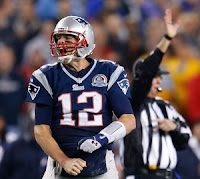 Whether Brady wanted to down play it after the fact, whether he would deny it or not, that 1st down was for the entire NFL. That first down, put the entire NFL on notice. The four touchdown night against the previously 11-1 Houston Texan defense, that was what the rest of the NFL was afraid of. A Tom Brady that was turning it on at the right moment and clicking on all cylinders, just weeks before the playoffs began. To take it one step further, the rest of the conference is headed in the wrong direction. (Excluding Peyton Manning & the Broncos that is.)

The Baltimore Ravens lost each of their last two games and just fired their offensive coordinator Cam Cameron. Since their blowout victory against Oakland exactly one month ago, the Ravens offense hasn't looked good. They've squeaked out (2) three-point wins, then ultimately lost two games vs. two-backup quarterbacks. With upcoming games against the Broncos, Bengals, and Giants, the Ravens will have their fans full trying to prove they're worth a playoff spot.

The Pittsburgh Steelers, like their AFC North counterparts, have been terrible as of late. The Steelers managed to drop a clunker to the Browns and just got manhandled by the Chargers in two of the last three weeks. With Roethlisberger back, the Steelers are going to have to find some consistency in their offense and keep their defense healthy. To make matters worse, after battling injuries all season-long, the Steelers have now suspended running back Rashard Mendenhall for one-game due to team violations.

As for those Houston Texans, they got abused on national television in front of the entire country. They couldn't slow Tom Brady and the Patriot offense down, they couldn't get a hand in his face, they couldn't stop the run either, hence the 42-14 throttling. Sometimes you can say to yourselves, "it's one game," this is not one of those times. The Texans have yet to win a big game when challenged and for the second time, the first being their early season loss to the Packers, they've been embarrassed.

With the Denver Broncos winning eight straight since starting the season 2-3, and quarterback Peyton Manning looking like, well Peyton Manning, then the New England Patriots coming out as hot as they looked in Foxboro, MA last night, it seems as though we might get another Manning vs. Brady treat, sure the uniform might not be the same, but the matchup sure as will be.

All things being equal, after last night, they'll be no more laying in the cut for Brady and the Patriots. For more, follow us on Twitter!