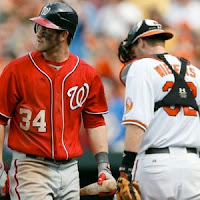 Step aside, NATITUDE. The best record in the 'bigs' throughout the regular season, exit stage right against a St. Louis Cardinals team that knows what it takes to win in the postseason. Would been nice to have that 24-year old right-handed phenom in a decisive Game 5, no!?!?

The Orioles were a cute story. Dog fight with the New York Yankees for the American League East crown, coming up just shy but still reaching the postseason. An inspiring Wild-Card win in Arlington, TX against the 93-win Texas Rangers. Unfortunately, running into C.C. Sabathia in a 'Game 5' in The Bronx is bad for one's World Series dreams.  However, as in Buck Showalter's last two stops, it's possible that a loss here could only lead to better fortune in the Orioles near future.

I wanted it bad for Billy Beane and his Oakland Athletics, I really did. Coming back like that in 'Game 4,' after claiming the A.L. West against a high-payroll Angels roster and the Texas Rangers, who didn't want them?!? Like Sabathia in New York however, but worse, you don't beat an ace like Justin Verlander when it counts. Two starts, sixteen innings, twenty-two strikeouts, 1-earned run, Oakland had no chance when that went five.

As for the Reds, you only had to win one . . . at home! Ninety-seven wins during the regular season, fifty of them at The Great American Ball Park! Yet after the Giants got one, in extra-innings none the less, then they turned it over to their one-two punch of Lincecum / Cain. Series over, till next season Cincy. 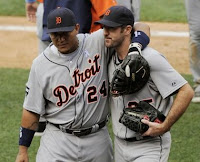 Who wouldn't like the Tigers in this one? No really, I know the Yankees are always a favorite till they aren't, but Detroit is legit. Manager Jim Leyland's team has the best pitcher remaining in the postseason, Verlander, they run out at least three very quality starters, and between Prince Fielder, triple-crown winner Miguel Cabrera, and a combination of Delmon Young and Austin Jackson, the Tigers can rake. Back to those starters however, Doug Fister looked outstanding against Oakland in the ALDS and Max Scherzer hasn't allowed more than three earned runs in an outing since August 5th. In a series where they'll have to wait to start Verlander on normal rest, Fister and Scherzer are going to be key to getting the Tigers off to a good clip. The Yankees on the other hand are a different story. Manager Joe Girardi is going to have to look to Curtis Granderson and Robinson Cano to carry the Yankees offense giving the struggles of Alex Rodriguez and Mark Teixeira, that short porch really helps Granderson who smashed 43 homers this season. The reason we like the Tigers so much isn't necessarily the struggles of the Yankees sluggers, it's more or less their reliance on C.C. Sabathia to get them big wins and hope they can out-hit their opponents when other starters are on the mound. Any Yankee success will really depend on what they get out of 37-year old right hander Hiroki Kuroda to follow Sabathia in the rotation. I like Andy Pettitte too, but he's 40-years old. Our Call: Tigers in 6.

There is no more excuses to overlooking the St. Louis Cardinals. The reigning World Series Champs had their Hall of Fame manager Tony LaRussa retire, lost All-World slugger Albert Pujols to the Angels, made the postseason due to new Wild Card rules implemented just this season, and saw themselves down 6-0 on the road in the NLDS, and they're still in this position today. The team has no idea when their season should be over and that's the way they play. Chris Carpenter is an animal in the postseason, Carlos Beltran has the entire team behind his offensive play leaning on him, and they get a shot at San Francisco without ace Matt Cain till game three! I don't care how good San Francisco plays in the postseason or where Tim Lincecum is in the rotation, or even out of the pen, I'm on board with St. Louis and won't be off till they're golfing. Our Call: Cardinals in 7, always interesting.