The first jewel of the Triple-Crown, the 27th-pitcher in MLB history to throw for a second no-no, two great NBA postseason performances, and a nightcap of prize-fighting from Las Vegas, I'd say we had a full slate on Saturday night.

Verlander's 2nd No-No Detroit Tigers 28 year-old right handed pitcher Justin Verlander tossed his second career no-hitter on late Saturday afternoon. With a second no-no, I'm awake on Justin Verlander and you should be as well. Back in 2007, Verlander recorded his first no-hitter which 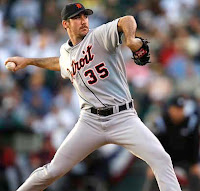 saw him strike out twelve batters and allow just four walks, but as 13-year veteran Hideo Nomo proved to us in 2001, no-hitters don't just happen for the great ones. However, a second no-hitter in your career does more than raise an eyebrow. Verlander has won 17 or more outings in four of his last five seasons and after his 108-pitch no hitter against Toronto on Saturday, I'm prepared to call him the American League's new Roy Halladay, the best pitcher that you don't know.

Animal Kingdom's Derby Victory I'm sure you woke up this morning and buried somewhere under these other stories, you saw the name of the 137th Kentucky Derby winner, Animal Kingdom. Yet before you begin catering on the mother's in your life today, please watch The Fastest Two Minutes in Sports. Atop winner Animal Kingdom was jockey John Velazquez who showed up in Louisville expecting to ride early Kentucky Derby favorite Uncle Mo, then when that horse was scratched due to eating bad Chinese the night before, Velazquez jumped atop Animal Kingdom whose jockey had suffered an injury earlier in the week. Now headed to the 2nd jewel of the elusive Triple Crown, Pimlico Race Track and The Preakness Stakes, all eyes will be on Animal Kingdom and the question will be asked more times than you can digest, can he do it, can he win The Triple Crown?

The Grizzlies Wild Ride Continues I was just as shocked as you when the Memphis Grizzlies, an eight seed in the Western Conference playoffs, knocked off top-seeded San Antonio in round one. Led by 10-year beleagured veteran Zach Randolph,

the Grizzlies then dropped Oklahoma City in the first game of their 2nd-round series. Then on Saturday evening after Oklahoma City had sorted out Memphis in game 2 and were clinching to a 16-point lead in game 3, I'd closed the book on the '11 Grizzlies. Now I'm eating 'crow' by the spoonful. Memphis roared back from the deficit, took the Thunder into overtime, and as Zach Randolph pulled down 21 rebounds and scored 21-points, the Grizzlies ripped the series back in their favor. As the Lakers seem to be on the verge of an ousting from the playoffs, Memphis has somehow caught the eye of every basketball fan still watching this years postseason, and for good reason.

Rondo's Game 3 Performance Roll out the footage of 1988 World Series and Kirk Gibson. Cue an ailing Willis Reed in the 1970 NBA Finals. Now, place Celtics guard Rajon Rondo in that same pantheon. After dislocating his elbow in an absolutely gruesome moment during game 3 on Saturday

night, making his left arm useless, I immediately texted my brother the following; 'That was gross, the Celtics are D-O-N-E.' Now that last sentence may still be true for a slew of reasons we're going to put a pin in, but when Rondo came out of the locker room shortly after, I was stunned. When Rondo checked into the game, I almost fell off the couch! Fueled by a packed house of rabid Celtics fans, the desire to ensure his Celtics didn't go down into a 0-3 hole, and by the simple fact that Rajon Rondo is becoming the face of the Celtics for the next ten years, Rondo strapped this squad to his right arm and played through. What Rondo did on Saturday night was flat out remarkable!

Pacquiao & Mosley's Disappointing Showing Very much like that last drink of the night, we didn't need this one. Champion Manny Pacquiao v. 39-year old Shane Mosley left us exhausted and just wanting it to be over! Pacquiao didn't lay Mosley on the mat but once very early in the night, as for Mosley, I'm still trying to figure out why he showed up for this one? Shane Mosley fought this fight as if he needed the money and just didn't want to get knocked out. Countless times Pacquiao and Mosley tapped gloves, showing a sign of respect for the other fighter, and countless times, Mosley refused to lay in and fight Pacquiao. If there was every a boxing match that left us wanting more it was last night. What we knew before the fight remained true, less Pacquiao and Floyd Mayweather get in the ring, the book is out on Pacquiao, he's a record book fighter. As for Shane Mosley, he's forgettable, as forgettable as a Hall of Famer can be anyway.

On a night when we, I mean myself, wanted to dial back the clock and put Thoroughbred Horse Racing and Boxing back where they once were, turns out they proved why they are where they are now. If this is what we're going to get, I'll take NBA Postseason and a No-hitter every night of the week . . .