The fastest two minutes in sports, Churchill Downs, mint julep's, the finest 3-year old thoroughbreds this side of Dubai, the 137th running, pass the Evan Williams, it's derby weekend ladies and gents!

Now I thought about a couple different ways to approach this column:

(1) Rattle off 3-to-4 ponies that I (an admitted novice) really have done some reading up on. Pants on Fire, the Louisiana Derby winner (March 26th) ridden by Rosie Napravnik attempting to be the first woman winner of Kentucky. Twice The Appeal, a long shot if not being ridden by super-jockey Calvin Borel, three Derby wins in the last four years. Dialed In, the favorite and winner of three starts in his very short career trained by Derby winning trainer Nick Zito. However, if you're watching the Derby the most likely you'll hear all these stories and more all afternoon on Saturday.

(2) Sell you on horse racing. Tell you how knowing something about equine racing makes you just a touch classier and a bit more unlikeable to your friends than you already are. Because let's face it, liking Horses, Ultimate Fighting, Boxing, or NASCAR, places you amongst some minority in the sports entertainment business (going McMahon on you). Telling your friends that they've got to cancel late Saturday afternoon plans with their significant others at Home Depot to join you for the Kentucky 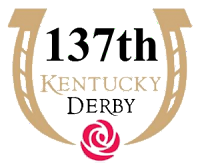 Derby doesn't exactly make you the popular one. Then I opted out of this as well, because folks it's the 'sport of kings,' if you can't wrap your mind around three days of elite horse racing from the spring into the summer for the Triple Crown, then you are not buying anyway!

So instead I'm taking another route, I'm telling you what excites me about The 137th Kentucky Derby:

After tomorrow, you and I can discuss the possibility of the first Triple Crown winner since Affirmed in 1978. For the next two weeks, we'll talk if the winner of tomorrow's Kentucky Derby has a shot at Pimlico Race Track on May 21st.

The Derby has both. For once an event is just as much about the clothes, the splendor, and the atmosphere as it is the gambling and sport! Sure, you don't mind watching 13-hours of non-stop red carpet coverage before an award show, but it isn't fun. Sure, she doesn't mind watching playoff hockey but she won't say she likes it. The Kentucky Derby does both, for the two of you! After watching it just once, most women are hooked on a dream trip to actually see it in person!

The minutes before. When through the television you can hear the buzzing coming from the infield to the grandstands of the 150,000 in attendance. The 3-year olds nervously entering the gates prior to the roar that is about to come howling out of Louisville.

I'm not bought in. I get one day, for two minutes, that's it!!! I don't need to wait for a game 7, I don't need to spend thousands of man hours on regular season games, all-star

games, just a few moments and it's over! That's the excitement I look forward toward!

Now I'm not leaving this one without making a call here either!

Pants on Fire, would love to see something we haven't, a woman winning the derby, but more importantly, a story to follow! Pants on Fire satisfies a couple things which make it a quality pick. He's won as recently as March, has had plenty of rest, and didn't get rattled in Louisiana.