It's a wrap, Dallas and Miami will meet in the NBA Finals, you can pencil that in. I'm not saying anything that hasn't been said or is emphatic in nature, but it will happen. With future Hall of Famer Dirk Nowitzki turning in record book performances in the Western Conference Finals and All-Star Heat forward Chris Bosh mashing his way through Chicago, the Mavericks and Heat have one goal in mind, The Finals.

Down 15-points in a crucial Game 4, in the fourth quarter none the less, something flipped inside Mavs forward Dirk Nowitzki. For the 32-year old who will be 33 by seasons end, the opportunities to win an NBA Championship won't continue to present themselves, and Nowitzki has figured that out in this postseason. Throughout the playoffs Dirk has poured in five 30+ point performances, all Mavericks wins, Monday night was no different. As Oklahoma City clung to the lead and hopes to

knot up their best of seven series, Nowitzki buckled in. Dirk scored 12-points in the final quarter and was among other things, unstoppable. As the Mavericks went on a 17-2 run to force overtime in the fourth quarter, the Thunder had no idea what to do or how to slow Nowitzki and the Mavericks. The young Oklahoma City Thunder led by 2-time scoring champion Kevin Durant, missed open shots, forced passes to their superstar scorer, and looked lost at times in the fourth quarter and overtime, Mavs veterans Nowitzki, 34-year old Jason Terry, and 38-year old Jason Kidd, not so much. In taking a 3-1 series lead and all but wrapping their hands around the Western Conference Championship, the Mavericks yet again in this postseason, showed why the NBA Finals will be going through the Lone Star State.

Look, what were you hoping for? I know we don't 'like' Chris Bosh and the idea that he is in the neighborhood of fellow superstars LeBron James and Dwyane Wade. I know we all want to cry crocodile tears for the people of Cleveland, as if we really give a damn. I respect that, but now it's time for us to show some respect for what Miami is, before they do what they promised, win a title. After Game 3, a game in which we were all reminded of why 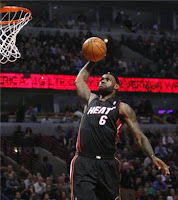 Chris Bosh (13 of 18, 34 pts.) was as sought after as he was, the Heat saw themselves up 2-1 with Game 4 coming in their building tonight. Head coach Eric Spoelstra figured out one thing very quickly, the Tom Thibodeau coached Bulls are going just as far as their MVP guard Derrick Rose takes them. Shooting 7 for 23 in Game 2, and 8 for 19 in Game 3, it should come as a surprise to no one that the Bulls are down in the series. With 10 assists in Game 3, LeBron James is getting closer and closer to the prize here, I'm officially done bashing the Heat (as if I wasn't projecting my anger from the Celtics series), between James, Wade, and Bosh, the Heat are about to get their first crack at an NBA Finals, send it to the bank! (Consider the 'Jinx' set)

I'll say this, David Stern is probably just as happy as I am to get to see Dirk, Dwyane, Jason Kidd, LeBron, and Chris Bosh in The NBA Finals . . .even if this sounds a bit premature.
Posted by Lynchy at Monday, May 23, 2011