With the draft only a day or so away, we're getting after it! Ripping off the teams who sit in very good positions on Thursday night. With the clock ticking and players lockout talk at an all-time high, let's jump right into the draft head first

The Cincinnati Bengals need to make a real changing of the guard move on Thursday night. Stop laughing, I agree that mentioning real change and Paul Brown's team in the same sentence is absurd, but it could happen. The Bengals ousted longtime offensive coordinator Bob 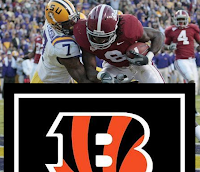 Bratkowski in February and brought in Jay Gruden to revive this offense on life support. After loading up a season ago drafting Jordan Shipley and Jermaine Gresham, signing free-agent Terrell Owens, and returning 1,200 yard-rusher Cedric Benson, the Bengals had high hopes. However, after another losing season, their veteran quarterback throwing twenty interceptions while be sacked twenty six times, and finishing in the basement of the AFC North, things have come to the point of overhaul. Our Call- Rid yourselves of Ochocinco and Palmer, select a run-blocking receiver in Alabama's Julio Jones, and return to a run focused offense as was in 2009.

The Arizona Cardinals sit in a very precarious position at #6 in round one. Each of the four teams selecting ahead of them have a need that doesn't involve the most NFL ready player int he draft, LSU's Patrick Peterson. Carolina at #1 has the Cam Newton Bug and it can't be cured. Denver would be out of their mind to pass on a defensive tackle at #2; they've got a serious 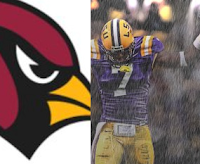 need to fill the void made by the departure of Jamal Williams. At #3, you've got the Bills and Chan Gailey, a team indicating they want to improve their pass rush above all at the top of round one. As previously mentioned, the Bengals are going to give their man Jay Gruden a young weapon on offense and have indicated so at nearly every step of the way. Leaving Arizona in the driver's seat at pick #5. Our Call- The Cards are going to field offers from several teams looking to trade up for possibly Peterson or even a quarterback they covet, yet if I'm Arizona with the ability to draft the best possible player in this draft, only a king's ransom would keep me from selecting Patrick Peterson.

The Dallas Cowboys actually are sitting in what looks like a pretty good seat in the early going. With three important needs to fill, a defensive back to improve their pass defense, a right end to replace Igor Olshansky, and an offensive tackle to support an aging line and the blindslide of quarterback Tony Romo, the Cowboys have a good opportunity in the first round. Top rated offensive tackles Tyson Smith and Anthony Castonzo will both be

available for them. While they have indicated they're sold on Nebraska cornerback Prince Amukamara, he will also be there if the Cowboys go secondary. Lastly, their pick of defensive ends including Cameron Jordan and J.J. Watt could also be the perfect player to pair with Bowen and Ratliff on their young defensive line. Our Call - Realistically, the Cowboys season was over the moment signal caller Tony Romo got knocked out for the season, if not earlier. If the Cowboys plan to showcase their big name receiver Dez Bryant and Pro Bowl quarterback Tony Romo, they've got to keep them healthy. Cowboys go offensive line, an out of character selection.

The Philadelphia Eagles have something every enticing that not many have. That would be a backup quarterback that could actually net you something worthwhile, Kevin Kolb. In a league where there is one position more important than any other, and a draft class lacking that one special quarterback (yes, my opinion), why wouldn't the Eagles dangle Kolb over 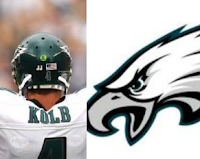 the noses of Minnesota, Tennessee, San Francisco, Washington, and Arizona? I'd much rather Kolb, a quarterback with a much smaller learning curve, than a rookie who is just adjusting to the NFL while also attempting to live up the hype which surrounds a top draft pick expected to be the franchise quarterback. Our Call - Kolb isn't a castoff, he's a quarterback with an unfortunate situation in Philadelphia and Andy Reid knows that. I fully expect the Eagles to deal Kolb especially if there is a player who they value much more than any of us think at this point.

The San Francisco 49ers are looking for their quarterback. In a year when I've come out and said, that quarterback to man your franchise isn't there in the first round, it's what Jim Harbaugh is attempting to do. Harbaugh is looking at a quarterback in Blaine Gabbert who has the attention of everyone at this point in the process.

You can't say it enough, the recent teams with pieces already in place, Jets, Ravens, Falcons, those teams found the quarterback who completed their works in progress. For Harbaugh, it seems as though he'll take the quarterback in the first round and coach them up just like he has with Andrew Luck out in Stanford. Our Call - The 49ers and Harbaugh grab Gabbert and go one step further with offense in the 2nd round as well. He's no joke as a quarterbacks coach and you can get the 'Niners really feel comfortable with him selecting a quarterback.