Oh How Quick That Changed

The morning of Sunday, April 17th, all was not well in Boston, Massachusetts.

The Boston Bruins had dropped the first two games of their best of seven series, in Boston against hated rival Montreal. The grumblings were becoming louder and louder, "same old Bruins," "when is head coach Claude Julien getting canned?," it had gotten bad.

The Boston Red Sox had stumbled pretty hard out of the gate. Dead last in the American League East, a terrible 4-10 through

their first fourteen, and more than one member of the pitching staff with an earned run average north of FIFTEEN!?!?!

As for the Boston Celtics, not even your most star-crossed C's fan would tell you they were confident heading into the postseason. A bench which was giving you nothing. A late-season trade of 1 of the Celtics starting 5, seemingly taking a turn for the worst. Oh, and a team that had gone just 13-11 the beginning of March.

Yet that was a week ago, and boy things have changed.

The Sox have ripped off seven wins in their last eight games. Starter Josh Beckett has rebounded from his rough 5-inning start in his first game, to pitch 23-innings in three games, allowing just three earned runs, while looking really sharp. Embattled starter Daisuke Matsuzaka has 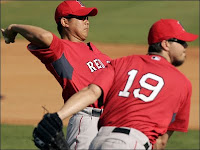 pitched two outings since last Sunday and has really come on strong. Matsuzaka pitched seven innings and gave up 10 earned runs in his first two starts, but this week Matsuzaka went 7+ in each start and recorded 12-strikeouts, just two hits, and zero runs allowed. Utility infielder Jed Lowrie continues to rake every day. The 27-year old is hitting .431 with hits in all but one of his last ten games. All-Stars Dustin Pedroia and Kevin Youkilis are getting on base and the Red Sox offense is also taking that same corner as their staff has. Now back to just two wins off the pace of the first place Yankees, I'm going to say I told you so.

The Boston Bruins have really taken their gut check seriously after working themselves into an 0-2 hole. The Bruins went into Montreal and took back the two they lost in their own building, including game 4 which saw the Bruins go down 3-1 before storming back to a 5-4 overtime victory. Then, for the second time in three days, the Bruins grabbed an overtime, this time a double overtime, victory and ripped a

3-2 series lead from the Canadiens. A masterful performance by Bruins goalie and Vezina Trophy finalist Tim Thomas led the Bruins to one of the more exciting playoff games in recent memory. On the edge of their seats the packed game 5 house at Boston's TD Bank Garden couldn't get enough. The roof waiting to explode at any minute as the Canadiens and Bruins alike missed on opportunity after opportunity throughout two overtimes. Then, on the stick of Nathan Horton, the Bruins are headed back to Montreal looking to take the series that once looked so far away when they'd fallen down 0-2 just last Saturday night.

In an honest moment, even some on the Celtics would have told you it might be too difficult this year, maybe. That was however prior to tuning up the Knicks in Madison Square Garden on Friday night. In what opened up as a close game, the Celtics turned it on and flexed on a banged up Knicks team. Between Rajon Rondo's Magic JohnsonESQUE performance and 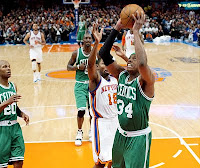 a combined 70-points from Paul Pierce and Ray Allen, I'd say the Celtics did everything but actually finish off the Knicks, even before they step on the court for game 4. This might be a different team without center Kendrick Perkins, I'll give you that, but this is still a team that runs 4-All Stars, players who command attention at both ends of the floor, and players who don't take losing lightly. If the Celtics can get a few days of rest before they head to South Beach, it'll be exactly what they've earned by fending off a Knicks team in games 1 & 2, then taking it to them in game 3. As long as Paul Pierce is on the floor, the Celtics have a chance to go deep.

In New England, over the past ten years, you can say we've been lucky, but that would be a dramatic understatement. As the Celtics & Bruins go to clinch playoff series today and later this week, and the Red Sox continue their rallying comeback from a slow start, keep clapping, because this decade has only just begun.