All Dogs To Play For Championship

I truly believe that this should go down as one of the most underrated NCAA Tournaments in tournament history. Between Virginia Commonwealth's unprecedented run from the play-in round 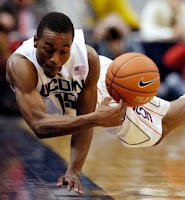 all the way to their ousting last night in the Final Four, and the stand-up fantastic play of Connecticut's Kemba Walker, which we'll get to see for one more night, what was this tournament missing?

Our tournament mainstays, Kansas, Duke, North Carolina, Kentucky, all reached the round of sixteen. Check.

The new Gonzaga. Butler, the only Division 1 basketball program from the state of Indiana to reach two consecutive Final Fours. Not Bobby Knight's Hoosiers or even Bird's Sycamores. Brad Stevens' Bulldogs are the new Gonzaga. Check.

Phenomenal displays of coaching. You won't speak of the 2010 NCAA Tournament, without discussing the coaching performance of Virginia Commonwealth's Shaka Smart and even Kentucky's John Calipari. Check.

Butler v. Connecticut, it's about to get great!

To preview the championship game may not be necessary, because if you've been watching any part of this tournament, you've been caught up in the parties involved. 'Big Shot' Shelvin Mack from Butler, 3rd-year player who has scored over 100 points in five games, including nineteen

from beyond the arc. The hardest working player in the tournament, the aforementioned Butler senior forward Matt Howard. Howard does every little thing a player can do on the court, provides every bit of leadership a team needs, and oh yes, he also has ripped down close to 40 rebounds through The Madness.

Then there is Connecticut. The Huskies are back in the championship game, Calhoun's bid for a third national championship. A crowning moment for the undisputed (sit down fans of Jimmer Fredette) best player on the collegiate level, Kemba Walker. They've beaten San Diego State when everyone was crazy for Steve Fisher and Aztec sophomore Kawhi Leonard. They've beaten Arizona when the Wildcats were on everyones horizon after they stunned Duke. Then Calhoun and Walker dropped John Calipari last night. Long gone is the team that stumbled in four of five heading into Big East Tourney play, this is a team that has won 10 in a row without looking back.

Find us on TheRightNowPodcast!
Posted by Lynchy at Sunday, April 03, 2011