Twenty-One through Thirty-Two: Mock It Up!

21. Cincinnati Bengals - Taylor Mays S, USC In the footsteps of his fellow Trojans, Taylor Mays follows Rey Maualuga and Keith Rivers to Cincinnati. While I agree a bit too high for a player who was exposed as much as Mays was in his final season in Southern California, he does have freakish NFL size. Remember, had he come out a year earlier he was a top ten selection. Turns out after returning to USC, it was the talent around him that proved to be the most impressive thing about Mays. Part of that talent is around him once more. Mike Zimmer can coach up Mays, the man is a 6'4", 225 lb. beast and that size and power hitting nature can't be ignored.

22. New England Patriots - Jerry Hughes OLB, TCU Talked into this pick. Here's the situation, New England would love to trade down and get a couple picks and draft Hughes closer to 27 or 30. Unfortunately, with the Packers in need 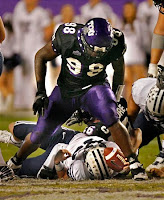 of replacing Aaron Kampman there is no way Hughes would get to them several picks later. Moving up on everyones draft board, he's got to be circled high on New Englands. He's a pass rusher who has amazing big play ability and really gets after it. This is a versatile New England Patriot if there was ever one. Hughes' game is no secret at all, it is a strong possibility that he will no longer be around at this point. However if he is, he's a lock to New England. They'd overlook his size (only 6'2") in favor of knowing he'll be able to get past big tackles like Jake Long and D'Brickashaw Ferguson. I love this pick for New England and I'm sure Jerod Mayo wouldn't mind either.

23. Green Bay Packers - Charles Brown OT, USC Aaron Rodgers really came on this year. Career highs in passing yards, yards per pass, completions, attempts, and touchdowns. Now it's time the Packers start to protect him for the long haul. Brown is a quick offensive tackle who can protect Rodgers from spending time on his back this season. One look at Brown and you have to be in awe, slightly under 300 pounds, Brown's 6'5" frame is imposing on defensive lineman looking to get after it. If any top flight offensive tackles are remaining, and they include Charles Brown, the Packers have to pull the trigger and set the blind side of Rodgers for years to come.

24. Philadelphia Eagles - Mike Iupati G, Idaho Iupati is probably the worst kept secret of the later half of this round. Roughly eight teams have been mentioned selecting the punishing offensive lineman. Iupati brings all the tools to the NFL, size, quick off the ball, ability to shutout nose tackles, he's a player. Everyone knows Iupati's weaknesses and strengths and the Eagles have a need for offensive line help soon. Philadelphia classically out thinks themselves and while they have other pressing needs such as replacing Brian Dawkins from last offseason or finding someone to stop the Cowboys from rolling over them again in 2010, but with Iupait they'll feel good having taken a value player.

25. Baltimore Ravens - Jermaine Gresham TE, Oklahoma Todd Heap had his best season since 2006 this past year, but he's been in the league for 10 seasons and been healthy enough 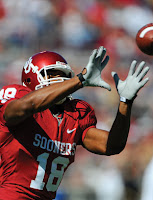 to play all 16 games six times. Gresham would be yet another weapon to add to the ever growing arsenal of Joe Flacco and the Ravens. Anquan Boldin, Ray Rice, and now adding Gresham would set up the Ravens offense for a few years that's for sure. Flacco would love to see a target like Gresham, a 6'6" monster with big hands who'd be a dream target inside the twenty yard line. Defenses in Cincinnati, Cleveland, and Pittsburgh would really start to fear how far this offense could go, especially how young they are. Sense a shift in Baltimore? The defense won't carry this team much longer if they draft Gresham.

26. Arizona Cardinals - Patrick Robinson CB, Florida State The Cardinals have lost Kurt Warner to retirement, Karlos Dansby to Miami, and traded away Anquan Boldin. Now time to add someone. In their playoff victory against Green Bay, the cardinals gave up 423 yard through the air and let Aaron Rodgers cruise to completing 28 passes and 4 touchdowns. They need help in the secondary, (23rd ranked pass defense a season ago), Patrick Robinson can improve on their secondary immediately. Robinson is a good cover corner and has the ability to make big plays on the ball. Unfortunately, he leaves much desired in his ability to step up and make tackles on non-receivers. If Robinson gets to Arizona and can practice against Larry Fitzgerald, his game will instantly improve, and so will the Cardinal secondary.

27. Dallas Cowboys - Nate Allen S, South Florida You know I'm a Cowboys fan, and it is hard for me to get away from mocking a pick which I really want the Cowboys to make. Nate Allen is exactly the player I want Dallas to select. With Ken

Hamlin's departure, the Cowboys have a need at safety, and they normally don't select offensive lineman in the first round, another thing helping his shot at heading to Dallas. Nate Allen started for three seasons at South Florida, in the same secondary that once included current Cowboy standout Mike Jenkins. For years now the Cowboys have gotten killed over the top, Nate Allen can hang with players like DeSean Jackson who have immense speed. While I realize this pick makes too much sense, I can't ignore that Dallas has made some quality picks lately. Jerry, draft Nate Allen, please!

28. San Diego Chargers - Ryan Mathews RB, Fresno State The Chargers will get their nose tackle / defensive tackle in the next round and fill the hole left by Tomlinson right now.

Mathews is a pretty solid rusher and threatening inside the red zone. An offense with some versatility just got even more by drafting Ryan Mathews. Between Mathews and Sproles, the Chargers once again get back to having two rushers who punish the defense, similiar to when they had Tomlinson and Michael Turner. However, as a caution many teams ahead of San Diego may also feel that he's the best available running back and feel a need to take him earlier than 28. The former Fresno State running back replaces those touchdowns Tomlinson got last year and takes pressure of Philip Rivers right away.

29. New York Jets - Sergio Kindle OLB, Texas The Jets may have just added Jason Taylor but thats to add insurance with this pick. Kindle can rush the passer and cover as an outside linebacker but needs to become a tougher all around player,

this Jets defense can help him with that. Kindle needs to put a charge into Vernon Gholston who is the biggest bust I can think of in recent years. The Jets have made some quality moves this off season adding Santonio Holmes and LT on offense, but need to make a couple steps to improve their defense by adding a youth pass rusher.

30. Minnesota Vikings - Maurkice Pouncey G, Florida Pouncey can help an aging Viking offensive line and hopefully see their rush game have a bounce back year. This kid has bounced throughout the first round and at this point, he's the best offensive lineman available, thats what Minnesota really needs. Most of these Florida players are built to work hard and overcome size issues, Pouncey is one of those guys and can benefit from being able to learn by rush blocking right away with a veteran line around him.

31. Indianapolis Colts - Jared Odrick DE, Penn State The Colts are a perfect defense for Odrick to be added to, he's got a load of talent that needs to be groomed. Athletic defensive lineman is what Indianapolis has known for acquiring on that side of the ball, Odrick adds to what they've done. I actually believe the Colts would be stunned to see Odrick still around at this point because of what he's done on the college level and the skills he displayed in pre-draft workouts.

32. New Orleans Saints - Everson Griffen DE, USC The defending champions need to linebacker help but should probably look to free agency to fill that void or a veteran with leader qualities much like Scott Fujita who they've just lost. Griffen has alot of questions but does give them a defensive end who can rush the pass, exactly what they need. All these USC players worry me, they are a great team but questionable on their own. The other thing, exactly what follows Griffen, is that many believe they are lazy and rely on their natural talent all too often. All that being said, Griffen is possibly the best defensive end remaining, or Florida's Carlos Dunlap, either would be good for the Saints
Posted by Lynchy at Tuesday, April 20, 2010