Shhh; It's Time To Keep It Real!

I needed a reason to bring back Keep It Real Friday. If you were giving it up to pay your catholic dues of Lent, Easter is over and Jesus has been resurrected, Tiger just shot a 68 on Day 1 at Augusta. Time to Keep It Real!

Are you kidding me?!? Miss the cut?!?!? As the immortal Tiger Woods returns (yes, I'm a tad over the top) to his proper seat, amongst golfers not the tabloids, I'm pulling for him. That's right housewives we don't care about your demographic. Watching Tiger literally plow through his best Day 1 score in his 16 trips to August, I'm all in. Let's get one thing straight, 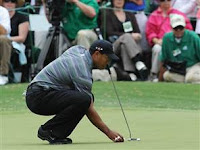 we (the general public) don't watch golf for the splendor, for the elegance, for the beautiful tee shots, we (the general public) are watching for Eldrick. We're either praying for a disaster or hoping we witness the "it" moment of 2010. Because believe you me, the disappointment of a SundayLESS Tiger, none of us want to see. Want him to get beat in a playoff hole? Want him to shred up the field? Want him to pump his fist at 18? Want him to slide on a green jacket with no one by his side? You still want him. For now, Tiger Woods is both the gift and the curse of sports. His star, big enough to draw monster numbers on Day 1, on a work day to boot, of a golf tournament? His star, big enough to sideline discussions about the best National Championship game college basketball has seen, which took place less than five days ago. Overshadow Sox v. Yanks? You bet. Keep It Real housewives, you want Tiger Woods as well.

To The Beltway?!?!? Has Philadelphia lost their mind? Not just the Eagles, the entire city? Between Philly brass dealing the best quarterback in their franchises history, Donovan McNabb, to their fans, throwing said quarterback to the curb like yesterdays trash, the entire city has lost their mind and needs to be set in place. Andy Reid, to whom I hold responsible for anything that happens in Philadelphia, in your own division? Five NFC title games, a Super Bowl appearance, a man you clearly know has no intentions on hanging it up,

and you send him to a division rival? When you divorce your wife, you don't set her up with your nemesis. So why Andy Reid, would you set Donovan up with Washington? That's not all, oh not by a long shot. Your replacement, Kevin Kolb, isn't exactly a no-brainer. The Philadelphia fans who think your better off without Donovan, you have no idea where your headed with Kolb under center, it's a gamble. He's played in exactly 12 games on the NFL level, and before that his time at the University of Houston wasn't exactly getting him used to taking big league licks. Kolb has amassed just 4 touchdowns and 7 interceptions during his limited career. Your backup? Mike Vick. No pun intended, is literally chomping at the bit to get in the NFL picture before his window slams shut. Stop the Donovan bashing in Philadelphia because he was the best you've ever had, that's past tense. Keep It Real! (As for 'Skins fans, slow down your still down 10 positions on offense.)

Sox & Yank'ed out! After three games to open up the 2010 MLB season, I'm a little tired of the all hands on deck, guns fully loaded, earth rattling Red Sox v. Yankees regular season series. The two franchises, both baseball and professional sports royalty, are playing entirely to often, taking entirely too long, and after an explosive last six seasons, I'm spent. I've got some theories on this, after watching those ALCS battles in 2003 and 2004,

can anything still compare? The Red Sox had a personality and the Yankees still had Bernie Williams. The walk off hits, the brawls, the Pedro Martinez type, these are the things missing from this rivalry, but would any of that make me want this more? Probably not. What is left to hype? The two teams spend more and spend more wisely than any franchise in baseball. Your home-grown talent, becomes their coveted free-agent. Their championship model, becomes yours, except with less resources. After watching 3 games of Sox v. Yankees, how are you supposed to then watch Braves v. Cubs? You won't see Beckett v. Sabathia, you won't see Papelbon leaning in against Jeter, you won't see Pedroia, Youkilis, or Granderson. Keep It Real! The Yankees v. Sox may be the best rivalry in sports, but in many little ways, it's slowly ruining baseball for the entire league,. and me!

Keep updated with us on the Podcast & follow me on Twitter, thank you for reading and as always. "Keep It Real!"
Posted by Lynchy at Friday, April 09, 2010