Before you bite into 10 hours of pre-Super Bowl coverage, LynchyRightNow is premiering a new column: The Readers Respond. This week we've polled the readers with a random question and got some great responses. That question was . . .

In your lifetime, who would you consider the most dominant NFL linebacker?

Monsters Of The Midway: (3) Legendary Chicago Bears linebackers received one vote. It's a well known fact, middle linebackers in the Windy City are in a class of their own.

Dick Butkus 1965-1973 The first of the Chicago Bears legendary linebackers. Butkus is widely thought of as one of the games toughest players of all time. A 6x All Pro, Butkus was a first ballot Hall Of Famer in 1979. However, it was his role as Coach Mike Katowinski in the semi-popular Saturday morning television show "Hang Time" that I'll remember Butkus for. An obvious choice, Butkus was the best linebacker of his generation, flat out.

Mike Singletary 1981-1992 Singletary was a 2x NFL Defensive Player Of The Year, most notably in the year leading the famed 1985 Super Bowl Champion Chicago Bears. Singletary picked up right where Butkus left off, becoming the feared middle linebacker of the Bears throughout the 80's and into the 90's. Throughout his entire career Singletary missed just two games, a remarkable stat for a man who played as fast and hard as Singletary.

Brian Urlacher 2000-Present Following in the footsteps, Brian Urlacher is the most current in a line of historically good linebackers who've played in Chicago. In Urlacher's rookie year he took no time showing people what he had amassing 123 tackles including 97 solo tackles. Five seasons of 120+ tackles, five seasons with five sacks or more, and 17 career interceptions. As a NFL Defensive Player Of The Year in 1995, Notoriously leading one of the top defensive teams over the past 15 seasons, Brian Urlacher is closing in on a Hall Of Fame career.

The Original Lights Out & The Underrated: Nearly twenty years as a linebacker in this era? One of our next linebackers is defying career odds. The other had his career taken away far to early, but impressed none the less.

for the New England Patriots, few remember Seau for what he used to be. In 1994, Seau lead a San Diego Charger team to the Super Bowl, a year he amassed more than 150 tackles. Over his 19-year career Seau has amassed over 120 tackles six times and four more seasons of 90+ tackles, a true defensive field general. Now in his 4th season with the Patriots, trying to capture that elusive ring, Junior Seau earns respect from his legendary head coach Bill Belichick. Why else would a 20-year veteran continue to get playing time in this league?

Derrick Thomas 1989-1999 In a shortened career due to his passing, Derrick Thomas made more of an impact than most. The 9x Pro Bowler was a sack machine

at the linebacker position. In seven of his eleven seasons, Derrick Thomas recorded 11+ sacks en route to a career in which he put the quarterback on his back 120+ times. Derrick Thomas is responsible for putting a Kansas City Chiefs defense on the map, helping them win three division titles in his career. Almost everybody who wrote in Derrick Thomas said the same thing "If I had seen him play longer, he'd be tops." That's how much of an impact Derrick Thomas made in his career, much respect.

his 13-year career. Bone crushing hits, seven straight seasons of 10+ sacks, 3x Defensive Player Of The Year, LT is bar none the top dog among linebackers. Being named to the All-Pro first team for each of his first nine seasons gives you a hint at how big his impact on the Giants was. I could wax poetic about LT but I'll leave you with this, Lawrence Taylor is the only defensive player to win be the unanimous NFL MVP.

Ray Lewis 1996-Present As young people, Ray Lewis is the standout in the middle of any defense we can think of. Once you get over the 1985 Chicago Bears, you immediately turn to Ray Lewis and the 2000 Baltimore Ravens. The Super 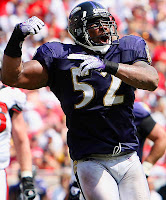 Bowl MVP of the Super Bowl winning Ravens, Ray Lewis is the unquestioned leader of one of the games most feared defenses. In his career he has taken home that Defensive NFL MVP twice, recorded almost 1,800 tackles, intercepted 28 passes, and put down 12 seasons in which he made 100 tackles or more. Even at age 34, Ray Lewis is still one of the games most dominant players having his best seasons since 2004 this year. We may be too young to remember the whole career of LT, but Ray Lewis shouldnt' be overlooked, he's THAT good.

Thank you of your help and continue to follow us on Twitter & The RightNow Podcast!
Posted by Lynchy at Sunday, February 07, 2010