The Denver Nuggets will win the '09-'10 NBA Championship, you can put that in the bank. Behind veteran point guard Chauncey Billups and basketballs most underrated talent, Carmelo Anthony, the Denver Nuggets are possibly the only team who can halt the coronation of King James and or the defending champion Lakers. Since the New Year, the Nuggets have won 17 of 24 games including victories at L.A., Utah, San Antonio, Cleveland, and Houston. If you've been sleeping on the Northwest Division leaders, it's about time to wake up.

Like many good NBA teams looking to make a championship run, it begins and ends with veteran leadership. Paul Pierce in Boston, Tim Duncan in San Antonio, Kobe Bryant in Los Angeles,

and of course, 12-year veteran point guard Chauncey Billups in Denver. Mr. Big Shot in Detroit, Billups led the Pistons to a title in 2004 and another Finals appearance in 2005, you want a guard with championship pedigree, you got it. At 33, Billups is having a career year. Averaging 19.8 points a game, a career high, and shooting .425 from the three point line, another career high, Chauncey Billups has made the Nuggets a serious threat to contend. In a highly anticipated post-All Star matchup with the Celtics, Billups turned in one of his best performances of the season. Shooting 10-10 from the free throw line and drilling two clutch three pointers, Billups scored 26 points and dished out seven assists in the Nuggets 114-105 win over Boston. A former Finals MVP playing floor general on a conference contender spells trouble out West.

Their 'other' guys, can take over a game. Case and point, 24-year old two guard, J.R. Smith. December 23rd, Smith shoots 10 of 17 from behind the arc and puts 41 points on the board against a 35 win Atlanta Hawks team, the Nuggets win 124-104. February 5th, J.R. Smith nets twenty-seven points and shoots .647 from the floor, the Nuggets record a 126-113 win over the Los Angeles Lakers. Of all the postseason contenders, does anyone else have a J.R. Smith averaging 15 points a night and shooting .405 from the field? Probably not. Inching closer and closer

to a double/double a night, 9-year veteran Kenyon Martin is playing very well as of late. In the Nuggets big win at Cleveland last week, Martin poured in 18 points in the paint and ripped down 13 defensive rebounds in the midst of a 17 rebound night. Banging with the Shaquille O'Neal all night long, Kenyon Martin made his presence felt. Having his best year on the glass since 2006, Kenyon Martin is making a difference in the middle of the Nuggets defense. Lastly is Chris Anderson, the 6-10 bench man for the Nuggets. Anderson is coming off the bench playing just 22 minutes a game and pulling down nearly seven rebounds, playing exactly the role they need him to, he's a huge x factor. Eleven times this season, Anderson has come off the bench and grabbed double digit rebounds, playing center by committee in Denver seems to work and that has been in large part due to players like Anderson. Shhhh, starting center Nene Hilario is averaging 15 points and close to eight boards a game, just another example of tough Denver is inside. And we wonder how the Nuggets are able to beat up on big Cleveland L.A. squads.

NCAA National Championship. Check. Gold Medal. Check. Next up? The NBA Championship. For the 6th-year small forward from Syracuse, Carmelo Anthony is racking up quite the trophy case at only 25 years old. Averaging 29-points for 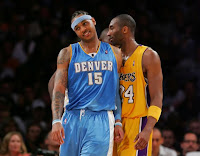 Carmelo Anthony has never been the impressive part, going toe-to-toe with LeBron James in his house, that is impressive. Hanging a 40-point night on Cleveland woke me up, I've always known 'Melo was dangerous, now he's got that instinct that we saw in Syracuse. Nine times this season, Anthony has gone for 35 points or more. Having his best scoring season of his career, and following up his great run a season ago, Carmelo Anthony is going to head into the postseason leading a Nuggets team that has more fire power than they've had since he's been there. So long as Carmelo Anthony can stay healthy down the stretch, the Nuggets have a talent that changes history on their hands. Can play with Kobe, LeBron, and Dwyane, and I've always contended their isn't much difference. After playing alongside these players two summers ago and winning a Gold Medal, something has ticked inside Anthony, and it'll be the same thing we realize when he hoists that ugly gold ball.

With the recent news of George Karl's cancer diagnosis, the basketball gods may also be in play. All due respect, but it's these type of stories that we witness teams gather around and play for, these Nuggets have that in them. The Nuggets are doing it very quietly, but we're about to hear the buzz. As much as a 37-win division leader can, the Denver Nuggets are laying in the weeds and I'm sure that is exactly where they want to be.
Posted by Lynchy at Tuesday, February 23, 2010