Hold up, you don't exit that easy. As Brady, Palmer, McNabb, and Rodgers grab the nine iron we're sending them off right. Just grit your teeth and take it in . .

All good things come to an end. As indicative as it was of their 2009 season, the Patriots were throttled at home and were knocked out of the postseason as quickly as they got in. From the eyebrow raising trade of Richard Seymour to kick the season off to the eyebrow raising now infamous 4th down call in Indianapolis, the New England 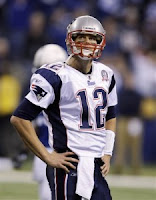 Patriots just never had that look. It's possible that New England is just turning over their defense and attempting to get bye on their past success as an offense, but it seems like more than that. Who does New England have that shows the upside of a Ray Rice? What would make you believe they are willing to pay Vince Wilfork? A 28-year old Vince Wilfork at that. Both Brady and the incomparable Wes Welker are going to be returning from serious injuries, questions do surround the play of Randy Moss, and folks, Kevin Faulk isn't getting any younger (11-year veteran). The Vikings showcase a young Percy Harvin and of course Adrian Peterson, the Cowboys have game breakers Miles Austin and Felix Jones, we mentioned Ray Rice, but what about Steve Breaston and Chris Wells in Arizona. The Patriots are getting older all around and are going to have to snag one of these top draft picks rather than hoping the value is still around in the next round with more picks. New England will always contend with Bill Belichick, but when does contending get old for a team who is expected to do much more.

The comeback of Cedric Benson, a 6-0 divisional record, things aren't that bad for the Cincinnati Bengals heading into the offseason after getting beat up at home on Saturday afternoon. The Bengals finally put together a

season to be proud of, a season which saw them win the AFC North and surprise some people. Embattled running back Cedric Benson finished 8th in rushing with 1,251 yards and went a long way in restoring his career and image, much like the Bengals did. Playing through the death of a teammate, these Bengals seemed to be an entirely different group than what we've grown accustomed to watching in Cincinnati. Unfortunately, the 4th ranked defense in the NFL was just outplayed on Saturday. The Bengal defense allowed 173 yards on the ground in the absence of standout rookie linebacker Rey Maualuga who had 63 tackles prior to breaking his ankle in week 16. Playing in a division with notoriously tough Baltimore and Pittsburgh, the Bengals have gone a long way in proving themselves in 2009.

Overpowered, flat out. The Philadelphia Eagles suffered their 3rd loss this season to the division rival Cowboys, and are left with the usual questions. Can Andy Reid coach you to a championship? Can Donovan McNabb lead you there? The answer is NO. Reid and the Eagles had a week to prepare for

a team they'd just been embarrassed by, and what happened? The same exact thing. From McNabb's cocky and borderline arrogant display prior to kickoff to his 19 of 37 performance, the Eagles are exactly what they've always been, not good enough. Outscored by 48-points in their three meetings, the Dallas Cowboys owned Philadelphia this season, yet two days after their playoff loss they announce Donovan will return as their quarterback next season. Aren't you sick of the same show? Sure he can get you to the NFC Championship and even the Super Bowl, but can they win with this group? No one thinks that Michael Vick could do the same if not better with DeSean Jackson and the rest of their young core? I'm going to go out on a limb and say the Eagles make the postseason, then get bounced after setting up their fans for another exit after high hopes.

You don't get into a shootout with the Arizona Cardinals, you just don't do it. However, the Green Bay Packers looked to be the team that could hang with the NFL's most high powered offense, then they didn't. Green Bay has to go into next season with high hopes. Aaron Rodgers isn't just the heir to Brett Favre, he's flat out

filthy. 30 Touchdowns, 7 interceptions, and over 4,000 yards passing, still have questions about him? The Packer defense made huge strides this season. A top five defense for the majority of the season, and that first round draft pick with NFL pedigree, Clay Matthews, well he's just as good as any. Matthews signature play was the strip of Adrian Peterson and resulting touchdown. The Packers have a ton to look forward to, a last second loss to Pittsburgh on the road kept them from winning their final eight games of the season. The shootout in Arizona almost fell their way after they refused to quit and kept scoring at will. Of any team which fell this weekend, the Packers are the only which really had a shot after the first half and pushed an overpowering Cardinal offense to the brink. If the Packers continue to take the chances they do and show that same fight, it'll only be a matter of time till Aaron Rodgers takes the center stage.
Posted by Lynchy at Monday, January 11, 2010