After looking for the road underdog all weekend, we suddenly found it on Sunday evening. Unfortunately for us, that road dog was the only one we didn't expect to advance. Heading toward Championship Sunday with two of leagues premier quarterbacks, the best defense in football, and one 40-year old gunslinger, it's bound to provide great theater.

What did New Orleans prove? After their blowout (45-14) win over Arizona, Drew Brees said it best "We all see the team that won 13 games in a row, not the team that struggled against the Cowboys and let one get away from us against Tampa . . ." With that, the Saints are back. 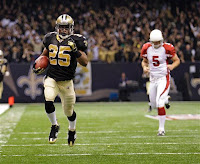 You can't break down Saturday's divisional round victory without first mentioning factor back Reggie Bush. It wasn't just the 83-yard fourth quarter punt return, it was the way Bush ran that impressed me. Attacking the second level, running down hill, and more importantly showing the league what made him a top pick four seasons ago. 217 All-purpose yards, including both the punt return for a score and a 46 yard run for another touchdown. When Sean Payton said Reggie was too explosive a player not to be successful in this league he was right, and on Saturday we all got a glimpse of just how successful he can be. Final Thought: Twelve more first downs than Arizona and New Orleans was in business. If you leave Drew Brees & Co. on the field long enough, they'll bury you there.

Indianapolis is poised, and has been. Peyton Manning completed 30 passes to seven different targets. The Colts defense held Raven running back Ray Rice to just 67 yards and forced three fumbles to go along with their two interceptions. A 20-3 victory later and Indianapolis is

hosting the AFC Championship game with a trip to the Super Bowl on the line. Defining the Colts season was receiver Pierre Garcon. In a heads up play, Garcon turned into a defender after an early third quarter interception by Raven safety Ed Reed. Garcon would chase down Reed for some 30 yards and punch the football out of Reed's arms giving the ball right back to the Colts. Smart and precise football play from Indianapolis is exactly what we've come to expct, and no one does it better than the 2009-2010 Colts. Final Thought: From the head coach down, every Colt looks toward #18. Peyton Manning doesn't just run the offense, he is the offense. As Manning has turned Garcon & Collie into household names, he's looking to add yet another Super Bowl to his mantle and nothing is getting in his way.

Statement Made. The Minnesota Vikings made a statement as they handled the Dallas Cowboys on Sunday afternoon. The now 9-0 inside the Metrodome Vikings, are traveling to New Orleans, and look very sharp. The Vikings forced Romo on the sidelines and made it tough for the Dallas

defense to get off the field. The statement should be loud and clear to New Orleans, they figured out how to stop a good offense and break an excellent defense. The Viking defensive line dominated the Cowboy offensive line and gave quarterback Tony Romo very little time to throw the ball down field, which is exactly what they need to do in New Orleans. Brett Favre completed just 15 passes and four of his 15 were for touchdowns, including 3 to Sidney Rice who had a career day. The 3rd year receiver from South Carolina hauled in six balls for 141 yards becoming Favres favorite target on Sunday afternoon. Final Thought: The Saints could be in for a tough afternoon if Minnesota can duplicate their divisional round performance. The Vikings did to Dallas what not many thought they could do, and not many will think they can do that to New Orleans.

Crashing The Party. With three of the top four seeds into the next round, no one thought San Diego wouldn't be one of them. Except New York Jets brash head coach, Rex Ryan. The New York Jets do a few things extraordinarily well, run the ball and play defense, San Diego figured this out

the hard way. For the second straight week rookie running back Shonn Greene mashed up a division winning defense for well over 100 yards. A 128-yard performance against San Diego would lead the Jets offense to 170 yards on the ground. The Jets defense would come out and force to interceptions. While they allowed Vincent Jackson to make his plays and Philip Rivers to do what he does, they don't allow anyone to stop them from their gameplan. Final Thought: The Jets don't shoot themselves in the foot. While San Diego racked up 10 penalties for over 80 yards, and the Jets only made Sanchez throw the ball twenty times, it is no surprise the outcome. The Jets maintain what they do well and that's how you win in the postseason.

Just weeks remaining before we crown another Super Bowl Champion and the surprises keep coming. Power Rankings out tomorrow . . .
Posted by Lynchy at Monday, January 18, 2010