Before I proceed allow me to fill you in on a few important details. (1) NFL Commissioner, Roger Goodell, only

conditionally suspended the fallen from grace quarterback for the first six weeks of the season, October 19th to be exact. You've got a wait. (2) Brett Favre is returning from injury and at this point is about as good at making decisions as Lindsay Lohan on a Saturday night. Not to mention that Minnesota should be sticking to the ground game with the best back in the league. And (3) There are important quarterback story lines we're missing by following these two.

Jay Cutler & The Windy City. He has the current top selling jersey in the NFL. He's playing in NFL rabid Chicago. He has more talent than any Bear quarterback in probably twenty years. When the 2009 season kicks off Jay Cutler will have all eyes on him. Maybe the Bears defense is a little older in

the tooth and this move is too little to late. However, if your a Chicago Bears fan whose has sat through the Brian Griese/Rex Grossman/Kyle Orton era, Jay Cutler is a godsend. In Cutler's 2nd & 3rd seasons in Denver, the 6'3" quarterback threw for an average of 4,000 yards a season and 22 TD passes, something they haven't seen in Chicago in a long time. Yes, Jay Cutler has his own set of question marks. Is he to much of a risk taker? Why would the Broncos be so anxious to deal a quarterback with this big of an upside? How much has he matured? Finally, is his big arm & big confidence just a product of Denver's offense? Rift between Cutler and Devin Hester already? Entering his 4th year in the NFL Jay Cutler is front and center on my list of quarterbacks to watch in 2009. The top quarterback in the Norris Division will surely change the landscape of football in Chicago.

Stafford, from Heaven To Hell. Your B.M.O.C. in Athens, Georgia with hopes of a Heisman Trophy just one year ago. Today, your the future of a franchise playing in the most depressing city in America. Sound enticing Sam Bradford?

The former Georgia Bulldog is presented with one of the toughest tasks the NFL could create for a rookie quarterback. Matthew Stafford will takeover the helm of a team coming off an 0-16 record and suffering from years of embarrassment both on and off the field. Once lining up alongside the best of college football players in the country, Matthew Stafford will meet reality this fall and unlike Matt Ryan, they'll be no Michael Turner to help him. This is truly a Heaven to Hell situation. In his first NFL outing, a preseason game in front of the Ford Field fans, Matthew Stafford threw for 114 yards on 7 completions. The jury on Stafford will be out for quite sometime, but from wire to wire we'll be following his every move. The Lions first win & Stafford's first touchdown pass, the young quarterback will wake us all up and hope for the best. If you can make it in Detroit, you can make it anywhere.

When They Were Kings. Quarterbacks for opposing teams in college football's biggest game of the past ten years. The '06 Rose Bowl seems a long time ago for both Vince Young & Matthew Leinart. Staring into the NFL quarterback abyss, these two former All-Americans have been passed by. For Young, you've got to really question his mental capacity at this point. The rookie sensation turned NFL Madden 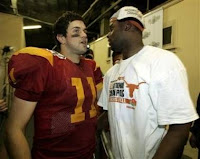 cover boy is now a legitimate backup in this league. The Titans #2 quarterback has suffered personal setbacks this offseason and on the field setbacks last season. With the Titans looking to win right now, it should come as no surprise that Vince Young isn't the guy they turn to. His career surrounded with questions at this point, where will Vince Young come into play this season? Or will he? And Matt Leinart? Leinart went from hyped up Cardinal quarterback in his rookie campaign of 2006 to playing in just 11 games over the past two seasons watching Kurt Warner lead "his" team to a Super Bowl. Matt Leinart is currently slotted as the Cardinals 2nd or even 3rd string quarterback with no sign of a starting job coming any time soon. The former Heisman Trophy winning college quarterback has seen his stock slip worse than Citibank. For Leinart and Young, playing in a game that matters is a distant memory and doesn't look like it'll come to them in the near future. Can these two get off the sideline in 2009?

Mike Vick is going to play a limited amount in this coming season. Brett Favre couldn't get through last season healthy. This season I'm concentrating on the "other" stories. Brady's return in New England. Cassel & The Chiefs. Can Romo win a playoff game? Is Phil Rivers taking the Brady/Manning leap? Will Vince Young & Matt Leinart see the field? Can Matthew Stafford win now? Is Jay Cutler the answer in Chicago? These are the real quarterback questions in the NFL, not how many touches can Michael Vick get and will Brett Favre be playing in 2010! God Damn I can't wait for the season to kick off!
Posted by Lynchy at Wednesday, August 19, 2009