Been There, Done That

The New England Patriots are scary good. The New York Giants aren't far behind; take that for what it's worth. After watching parts of each teams first preseason games and witnessing their acquisitions in action, I'm sold.

From The Meadowlands: The New York Giants feature one of the most dynamic ground attacks in the entire league. The punishing Brandon Jacobs and the speedy Ahmad Bradshaw combine to give the G-Men a 1-2 punch that is difficult to match. Jacobs is coming off his second straight 1,000 yard season and second straight season averaging 5.0 yards a carry. Impressive when you realize he's been 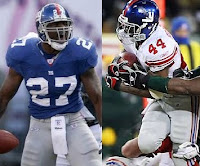 splitting time with other backs like the previously mentioned Bradshaw and Derrick Ward who became a Buc this past offseason. Jacobs may weigh in at over 260 pounds but make no bones about it, he uses every last pound to smash through defensive lines and wake up the second level. You'd be hard pressed to find a tougher back to tackle this side of Marion Barber than Brandon Jacobs. Ahmad Bradshaw will be stepping into a more definitive role in the Giant offense this season. In just 67 carries in 2008, Bradshaw rushed for 355 yards. In the process, giving the Giants yet another back to average 5+ yards per carry. With the departure of Ward, Ahmad Bradshaw is likely to see his attempts increase ten fold. The 5-9 back gives the Giants breakaway speed in the backfield, to use an overused term he gives them lighting to go with their thunder. Last season Bradshaw had 4 separate carries in which he rushed for 20+ yards including 1 of 77 yards. Jacobs & Bradshaw = Dangerous. Final Thought: Eli Manning adjusting to a new and very young receiving corps. and the Giant defense hoping for a injury free Osi Umenyiora in 2009. It'll be the ground attack that launches the New York Football Giants to an NFC Championship in the coming season.

From Foxborough: When I think Patriots and 2009 one thing comes to mind; Revenge Season. After the defeat in the Super Bowl back in January of '08 and the subsequent season ending injury to All-World Quarterback Tom Brady in the opener a year ago, the Patriots missed the playoffs. Now comes, the redemption season. Brady is healthy and looking sharp in his first two preseason games. Head Coach, Bill Belichick, has re-stocked the defense. Oh, and he's given

Brady more weapons on offense than ever. (1) Tom Brady returning doesn't just "make" the Patriots better, it makes them super-natural. Tom Brady carries a chip on his shoulder from 2008, Tom Brady is a 3x Super Bowl Champion, and let's face it he's flat out unflappable. (2) Free agent veterans are a luxury when used correctly. Corey Dillion was, Antoine Smith was, and Rodney Harrison was. Enter the likes of Fred Taylor from Jacksonville. Cornerbacks Leigh Bodden, Shawn Springs, and receiver Joey Galloway. Asked to play designed roles based on their age and remaining gas left in the tank. (3) Know your expendable. Words Teddy Bruschi, Vince Wilfork, and any & every defensive back the Patriots have had should come accustomed to hearing. When the Patriots make draft picks like Jerod Mayo, the 2008 draft pick turned 2008 Defensive R.O.Y. When the Patriots draft former Boston College standout Ron Brace, Vince Wilfork should understand the Patriots are taking insurance on his expiring contract. New England is three steps ahead of everyone in the league, consistently. Final Thought: The Pats work harder in the offseason than most teams do all regular season. In 2008 they turned a kid who hadn't taken a snap since High School into the hottest available quarterback in the hot stove season. Would you be surprised if they trail blazed through the regular season yet again? Of course not.

My NFL preview is just days away, but I couldn't help myself. The Patriots and Giants are on a collision course for January/February football and given what I've expressed, it's hard to argue against that. Two teams with no-nonsense head coaches. Two teams with ring touting quarterbacks. Finally, two teams with a winning attitude that gets you to the postseason and further. Could the Super Bowl prediction be as easy as Patriots v. Giants? I think it can!
Posted by Lynchy at Sunday, August 23, 2009