32 teams officially back at it. Training camp is in session and the NFL is back on our mind. The readers of LynchyRightNow are clamoring for The League and Sunday afternoons. All due respect to the MLB trading deadline and all things NBA summer league but I agree with the readers . . .

Let's Get After It.

With all the off the field dramatics of the NFL season and seven months removed from play what September game(s) are you looking forward to most? - Angelo, Albany

What?!? You didn't enjoy the life and crimes of Plaxico, Pacman, Vick, and Stallworth?!?! Back to the field. Two games I've circled on my calender for September. (1) Week 1, September 14th. All eyes on Monday Night Football and the Buffalo Bills in Foxborough, MA. Say what you want

about Terrell Owens but he can make even Buffalo sound exciting. Coupled with the full return of All-World quarterback Tom Brady, and we've got ourselves a show. No team in the NFL has done more to improve themselves than the New England Patriots. Adding veterans like Greg Lewis, Joey Galloway, and Fred Taylor on offense the Patriots are giving Tom Brady plenty of capable weapons around him. As for the Bills, don't count them out. Buffalo is the ultimate wild card. Adding talents like T.O. and Dominic Rhodes the Bills could give Trent Edwards a fantastic offense around him. Bills v. Patriots on MNF, doesn't get better than that to open the season up. (2) Week 2, September 20th. Sunday Night Football live at the home opener of America's Team. As the Dallas Cowboys unveil Cowboys Stadium to the world and welcome

the division rival Giants the NFL season officially gets under way. As a Cowboy fan I may be bias . . . . yep, I'm bias. This is the first regular season game in Cowboys Stadium. Eli Manning v. Tony Romo. If you can't get up for Giants & Cowboys, I suggest Cialis. The Giants layed an egg in the 2008 playoffs and the Cowboys are hoping that the departure of "the wideout that shall not be named in conjunction with this franchise" will bolster an offense that promised us playoff wins. If we've learned anything from Jerry Jones this night doesn't go by without some fireworks, both on the field and off.

What team is this years Arizona Cardinals? - Ben, Austin

By Arizona Cardinals do you mean which 40-1 odds team will return to the Super Bowl? None. However, I like the Houston Texans if your looking for Super Bowl long shots. 8-8 in two straight seasons yet I like 'em. Run the ball and play defense, two things the Texans can do. Adding USC super rookie Brian Cushing through the NFL Draft, placing him alongside additional offseason acquisition Cato June 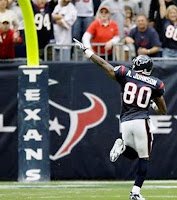 and of course DeMeco Ryans, the dominating Texan linebacker. With Super Mario Williams rushing the passer coming off a Pro Bowl season in which he's developed into one of the top pass rushers in the league if not THE top pass rusher in the league, the Texans defense will be hard to stop. To go one step further, 2008 rookie sensation Steve Slaton does wonders for the Texan offense. With Slaton providing the breakout ground game and quarterback Matt Schaub staying healthy the Texans should be just as dangerous as ever. Oh, and that dirty little secret that Andre Johnson is top receiver in the NFL, isn't such a secret any longer. Andre Johnson is a DB's worst nightmare, flatout. So to answer your question? It's reasonable that the Houston Texans could be playing in the postseason, and that'd be somewhat of a shock to most. (Even though I don't believe they've ever had a winning season)

Can we get a breakout rookie? Given the team they were drafted to which rookie do you think can have a Matt RyanESQUE season? -Stephanie, Lansing

I've thought about this believe it or not. Right from your neck of the woods, Big Ten country, comes Beanie Wells. The defending NFC Champion Cardinals drafted right at #31.

However, the success of Beanie Wells depends on his ability to stay healthy. Wells whose suffered injuries late in his Ohio State career needs to stay on the field to be the breakout rookie the Cardinals need. The running game is exactly what the Cardinals need to stay atop the NFC West. With Larry Fitzgerald and Anquan Boldin returning for yet another year the Cardinals offense is set to make the same run. Chris Wells adds a running style the Cardinals have lacked. A power runner who can open holes and keep the defense honest with the big wide outs sprinting down the field. What the Cardinals have lacked in their running game with Edgerrin James and Tim Hightower, Chris Wells can deliver. The '07 & '08 collegiate 1,000 rusher is a 240 lb. back who can storm the NFL if he stays on the field. That might be a big IF.

What team changed themselves the most from last season? More so what team owns the title "favorite"? - Steve, San Diego

Same team, same title. Ugh, the Philadelphia Eagles. As much as it pains me to name an NFC East foe as the Super Bowl favorite, I buy it. Giving Brian Westbrook help in the backfield in the form of rookie Pittsburgh back, LeSean McCoy. Hoping to duplicate their 2008 draft success of DeSean Jackson, 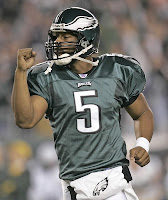 the Eagles select Missouri speed man Jeremy Maclin. Donovan McNabb happy yet? Despite the injury to linebacker Stewart Bradley the Eagles will be playing defense with more hunger than ever given the death of legendary defensive coordinator Jim Johnson. If any team knows what they are doing, it's the Eagles. Mainstays such as Lito Shepperd and Brian Dawkins are out but in comes former Patriot Ellis Hobbs to join his former teammate, Asante Samuel. The left tackle Jason Peters from Buffalo arrived in Philly via trade to further improve that offense. I'm of the opinion that till the Eagles are buried, they're never dead and you should be too. Just when you think Donovan is about to let you down, he shocks you. So no, I'm not going against Philly, ever again.

What star is approaching NFL MVP caliber? Will there be any surprises in 2009? - Rich, L.A.

One answer: Phil Rivers. Coming off his best season of his career Phil Rivers has smashed his way through. In 2008 the San Diego quarterback threw for over 4,000 yards and 34 touchdowns. The San Diego Chargers have one of the toughest quarterbacks in the league who has finally matured. Past Brady & P. Manning,

it'd be hard to argue that Phillip Rivers isn't the leagues next best quarterback. The Charger offense that Rivers leads was one of the most efficient through the 2008 season. At just the 25th ranked team in passes attempted, Phil Rivers & Co. ranked 7th in yards per game. Tied for 5th in fewest interceptions and tops in quarterback rating. If there was ever a year to catch people sleeping it'd be 2009. With the quick rise of the Kansas City Chiefs and a new coach at the helm in Denver, San Diego suddenly becomes the least interesting story in the AFC West. Just what the doctor order for Phillip Rivers. I expect big things from the Charger quarterback in 2009, so should you.

Don't look now bout the NFL season is fast approaching and with the majority of baseball cities out of it, that means you Baltimore, Kansas City, and Cleveland, I have just one question for you . . .Are you ready for some football?
Posted by Lynchy at Tuesday, August 04, 2009