Really though?!?! Are we all in agreement that we want a Heat vs. Thunder re-match?!?! I'm good with that for the next two years after this, book it!

Okay, okay, so part of me wanted a Knicks vs. Celtics match-up in the Eastern Conference playoffs, but not this way, not with that M*A*S*H unit that has become the 2013 Celtics. While we're on the topic of the Eastern Conference, call me when Derrick Rose is back. LeBron James is (excuse me while I choke-up), unstoppable. The Heat are going to cruise through the 'ECP', and they 'gon make it look real easy my friends. 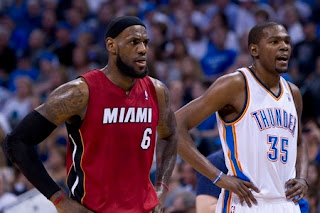 As for the Western Conference, I too like San Antonio, and I love that Coach 'Pop' is definitely in the Phil Jackson conversation and he didn't have to be an arrogant prick to get there, but the Spurs run is over, it's Durant and Oklahoma City's conference playoffs to lose. No?!? 3-1 vs. the Lakers, their probable first round-matchup this season and you thought Durant's throat-slashing gesture was on for the Warriors on Thursday night?!? That was for the entire state of California, the Warriors, the Lakers, the Clippers and even the Maloofs. The residual effects on the rest of The League from Miami's winning streak coupled with the way Oklahoma City is playing, do you doubt what I'm saying?

Who are we dismissing? Really?

The Spurs; Their best record in the NBA in 2012 didn't help them reach The Finals. Up 2-0 to Oklahoma City a year ago, the younger more explosive Thunder ripped off four-straight wins to reach earn the Western Conference title. Letting the Rockets Jeremy Lin go off for 38 in early December, splitting four with the younger Clippers, I won't forget Memphis handling them two years ago as an eight-seed either. Sorry Pop.

The Rockets & Nuggets; At some point in the postseason you've got to actually play defense, which the Rockets and Nuggets don't do. Both teams can push the scoreboard and that really works in the regular season. However, in the postseason things get slightly different. Yes, James Harden & Co. will go off off four 110 a couple times and win a few games, but are they going to be able to stop a team like Oklahoma City in seven games? (2) Twenty+ point losses to Oklahoma City and (1) three-point win proves just that. The Nuggets on the other hand, not only do they play poor defense but you attempt to point out the player on that team who is going to take over a game in the playoffs?!? Exactly.

The Clippers; The 'Clips can run, they're 'LOB City' for crying out loud, but really, do you think that the Pacific Division champs are going to add an NBA Championship two years after winning just 32 games? Why does that matter? Because, it's the NBA where parody does not exist. Since the 1979-1980 NBA season, a span stretching 33-years, only nine organizations have won an NBA title. This would be an issue for the young Clippers led by The League's best guard, Chris Paul. Oh, and they're 0-3 against Oklahoma City this season.

The Pacers & Bulls; Indiana can't win on the road and they were eliminated when Danny Granger went down for the season last month. I love what the Bulls did with an injured Noah and no Rose when they snapped Miami's near-record setting win streak last month, and while they play fantastic defense, it won't be enough to beat Miami in a seven-game series, it's just not enough. If Derrick Rose was healthy, it'd be a different conversation.

The Knicks; They're going to hit the postseason at the right speed that is for sure. In the first-round they're going to get the banged up Celtics who haven't been the same since their loss to Miami back on March 18th, losing 9 of their last 13. Carmelo Anthony has been averaging nearly 39-points a night in April, while the Knicks have been scoring 100+ in ten of their last eleven games. However, 'Melo's playoff record leaves something to be desired and because of that, I'm not moving chips to the center of the felt on that guy.

As the title of this post reads, let's Just Push >>> and get to Oklahoma City vs. Miami as soon as possible, you and I both know there can be no other eventual 2013 NBA Finals. . .