Can Winning Cure All?

It's a valid question, right?!?! Can winning change how the conversation on you starts? Admittedly, you'll almost always come with a 'but' following the initial statement, then again, how much winning can determine the rhetoric spoken about you? In the wake of golf mega-star Tiger Woods' most recent victory at the Arnold Palmer Invitational, we are forced to answer that first question.

Tiger's sixth-first place finish in the last 365+ days has elevated him back to the top of the Official World Golf Rankings. Immediately, those of us who pine to see the most dominant and successful athlete in his sport, during the post-Jordan era, begin to pump his fists in victory as he roars up the 18th fairway on Sundays, become over-excited. We want nothing more than to move 'all-in' with him. We push aside any negative comments which are made from the most important women in our lives regarding his personal failures as both a husband and a father. Those remarks from women who are our mothers, sisters, wives, daughters, and anyone else for that matter, are dismissed as we edge up on our couches hoping Tiger will win. 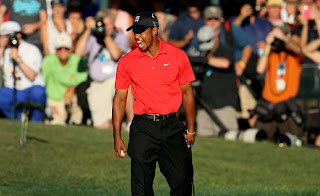 In a moment we forget how meek Tiger Woods looked during his 2010 over-publicized, sex-scandal mea culpa. We excuse that he hasn't won a major golf championship since 2008. We dismiss 23-year old rising star Rory McIlroy in nearly an instant, despite his two major championship wins in the last two years. Why?

It's possible that there is just unfinished business with Tiger Woods and his fans. Tiger was supposed to become the most celebrated golfer of all-time, and you and I were supposed to be able to watch him chase down Jack Nicklaus and his 18-major championship victories. Tiger was to be untouchable. He had won like Michael. He had done for golf what Michael had done for hoops. Then that all came crashing-down around him. The butt of jokes, the injuries, the divorce, the scandal, his inability to return to former greatness being paramount, you can pick, but the bottom line was that Tiger had become 'touchable.'

However, you and I still have to answer the question for ourselves. If Tiger is to slip on his fifth 'Green Jacket,' en' route to winning his fifteenth major golf championship next weekend in Augusta, will winning really have cured all?

The answer is yes.