For each year of the Obama Administration, twenty-three year old Landry Jones has been under center calling plays for the Oklahoma Sooners. Amassing over 12,000 yards passing, 93-touchdowns, and 29-wins, Landry Jones is on the precipice of becoming the winningest quarterback in Sooner history. However, can Landry Jones be a serious contender for this years Heisman Trophy, and lead the pre-season fourth ranked Sooners, to a run at the National Championship?

Jones is flying under the radar with all of the pre-season hype surrounding So. Cal quarterback Matt Barkley and Mountaineer signal caller Geno Smith. Despite Jones averaging fewer interceptions per attempt than Barkley, (39.70 vs. 35.60), Heisman hype has still 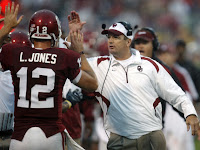 swayed to the more popular Trojan. Two-years older and two-inches taller than Barkley, Jones has the opportunity to become the third Sooner to bring the Heisman back to Oklahoma since 2003, following 2008 trophy winner, Sam Bradford and '03 winner Jason White. Playing behind an offensive line of veterans with over 100-starts as a unit and a defense which will put Jones in great positions to lead the Sooners on many-a-scoring

drive, it's arguable that he's got the better opportunity to both stay undefeated in the revamped Big XII, and put up monster numbers along the way.

We can circle a key date in Jones' assault of the Heisman Trophy as the sooners travel to Morgantown, West Virginia on Saturday, November 17th. Very similiar to last season as Baylor's Robert Griffin III traveled to Lawrence, Kansas and came out with an overtime victory after needing a three-touchdown 4th quarter to reach OT. Griffin followed up that performance by returning home to torch Jones' Sooners 45-38 and make himself the outright Heisman frontrunner. For the 23-year old Jones, a victory in Morgantown over fellow Heisman contender Geno Smith and a follow up of Big XII in-state rival Oklahoma State the following week could sew up another Heisman for the Sooners and the Big XII.

While a healthy offensive line and the emergence of either the suspended Jaz Reynolds or returning Kenny Stills are major factors of the success of Jones, 2012 does look promising for the future NFL quarterback and the Oklahoma Sooners.