June 28th's #1 overall selection in the 2012 NBA Draft, Anthony Davis, pulled down the rebound and held the ball out as the final buzzer sounded. With that, the United State's men's basketball team once again won Olympic gold and for the second consecutive summer Olympic Games, proved they are the most dominant and elite basketball squad in the world. Headed by the 6' 8", 250 lb., reigning NBA MVP, LeBron James, U.S.A. Basketball can be confident when they look toward the FIBA World Championships in 2014 and of course toward the Rio Olympic Games in 2016.

We'll have to take him on his word, and considering he would be 37-years old by the summer of 2016, the already 16-year veteran of the NBA, Kobe Bryant, has played in his last Olympics. Whether contrived as most would criticize or not, Bryant does and says all the right things and has proved himself to be a leader among men in these most recent Olympic games. He didn't have to be the 'team on my back' guy as he was in Beijing, his role however was 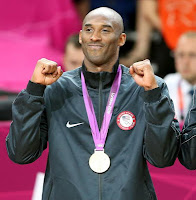 to be the constant threat and used when needed. Bryant was the elder statesmen in London and has most likely left an indelible mark on his younger teammates, the previously mentioned Anthony Davis, Oklahoma City star James Harden, and Minnesota star forward Kevin Love.

As Spain turned to the "box and one" defense to slow the scoring of reigning and 3x NBA scoring champion, Kevin Durant, in the second-half of Sunday's gold medal game, it became increasingly obvious on a world stage just how scary his talent is. Durant's offensive explosiveness was seen throughout the 2012 NBA postseason and will continue to be as he launches his assault on the NBA record books, but in the Olympics, he's only begun to scratch the surface. Durant's 30-points he dropped on Spain made up 33% of the U.S. offense and allowed LeBron to play defense against Spain's big front line. In his first Olympics, Kevin Durant introduced himself to the world in a big way.

It wasn't the 37-points and 10 of 12 from behind the arc in pool play against Nigeria, it wasn't the 18-points against Argentina, and it wasn't the 17-points against Australia. In his third Olympic medal winning performance, the 28-year old Knicks superstar Carmelo Anthony solidified himself once more as a remarkable international player. 'Melo had a tough NBA season in 2012 and has been criticized heavily in New York, however the Olympic stage seemed to be exactly what he needed to get back on track. Maybe it was sitting on the same bench as his former college coach with whom he won a National Championship with,

Syracuse's Jim Boeheim, or maybe it was just being away from the Big Apple, either way Carmelo Anthony seems to be back.

Countless times in their eight London Olympic games, U.S. Hoops not only looked to but counted on Clipper point-guard Chris Paul to control their offense and play relentless defense. The Winston-Salem point guard can be penciled in to lead the U.S. for not only the next four years and in Rio, but possibly beyond. Paul's offensive game allows him to seemlessly fit in and run an offense full of superstar scorer's but also turn his defensive efforts on some of the best guards the world has to offer. If Spain's Ricky Rubio is healthy enough to return to run the point for his national team in 2016, expect fireworks as Chris Paul and Rubio square off.

Then there is the last six months of one LeBron James. An MVP, an NBA Championship, and now a gold medal, now that's a haul. While he has been putting in work in London, everyone in Boston and Brooklyn and all the way out to L.A. has been preparing their plan to stop LeBron, something the world had no idea how to do this summer. LeBron played all five positions this summer and did everything the U.S. men's basketball team needed him to do. When LeBron needed to, he took over in a way it seems as only he can do now. As his teammates Dwyane Wade and Chris Bosh got healthy after their deep NBA postseason run, LeBron ramped up his game and came to play in London. The type of unselfish play that James put in this summer has made some of us turn the corner on the man who bolted Cleveland for Miami and gave us all a sick taste in our mouths. If there is a player

whom we talk about in such high regard as we've began to talk about Kobe Bryant after the Rio Olympics, it'll be LeBron.

Despite everything you've just read, the Olympics in London proved again that the world is getting even better at basketball than they were four years ago in Beijing. A seven-point victory over Spain for the gold medal really shows that even more so. With this Olympics most likely being the last time we see stars such as Tyson Chandler (29), and Kobe Bryant (33), and who knows what type of Dwight Howard, Derrick Rose, and Blake Griffin type injuries could show up four years from now, it's even that much more important that the NBA stars continue to water the seeds they've planted over the last several years. All things considered, tip your cap to these NBA superstars for showing up and doing exactly what they needed to do over the last several weeks. . .