The Return of Keep It Real Friday!

Keep It Real Friday is back! The weekly column that tells all of you to Keep It Real can't hold back much longer. Let's get after it . . .

First up, the New York Jets. Specifically head coach Rex Ryan, free safety Kerry Rhodes, and defensive tackle Kris Jenkins. Fellas, slow your roll! Someone needs to tell the Jets to pump the breaks on all this yip-yap prior to their week 2 match up in the Meadowlands with Tom & the Patriots. Since 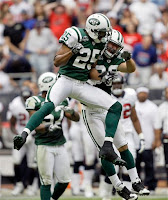 the Patriots won't be caught in a battle of words, I'll speak up. Rex Ryan, doesn't matter how many fans are screaming down on Tom Brady, they've screamed in Pittsburgh, Baltimore, Indy, and San Diego, when TB holds up those three Super Bowl rings things get very quiet, ask Dick Jauron. Kris Jenkins, you better treat this like the big dance because only one of these teams know what that is really like, and pal it ain't yours. Ohhh Kerry Rhodes, my favorite. You want to hit Tom Brady six+ times? You want to embarrass the Patriots? You want them to know you expect to win? Kerry, my mom once told me not to stick my hand in the dogs face, he bites. You put that one together. First real game back from major re-constructive knee surgery, Brady tossed up 378 yards and 39 completions, and he didn't even look good! Don't worry about what you want to do, worry about what you CAN do. Laurence Maroney said it best, "It's funny just listening to it." K-E-E-P, Keep It Real J-E-T-S!

Self-serving, to YOU who said I didn't know CFB. Why don't you roll back the screen and check out the Grab Your Pencils, Grab Your Books column. After posting my college football preview, all the doubters crawled out. "Your crazy talking up Boise State." "Notre Dame is the real deal, believe that!" My favorite? "Miami's Jacory Harris is not that good, Florida State is running the ACC!" Yea, I've been wrong before but when it comes to college football, show respect. After roughing up the

Ducks, Boise State slapped around their usual WAC foes, when they run the table are you still not going to talk about quarterback Kellen Moore and his undefeated Bronco squad? I'll say it again, BCS spoiler, no doubt. Notre Dame? Meet Michigan signal caller, Tate Forcier. From 18th in the country to unranked with 1-loss. Are they still the real deal? Jimmy Clausen, gut check time. I just watched Matt Barkley in Columbus, you needed to do that in The Big House to get me on your side. Lastly, you could call me out on college football and I'd defend myself, but your going to call me out on the ACC? That's like calling out Judd Apatow in comedy, suicide. After throwing for 386 yards on the road at Doak Campbell and leading his Hurricanes to a victory over host Florida State in week 1, Jacory Harris showed the Miami faithful what he's really about to do. A near flawless effort in week 2 against ACC foe, Georgia Tech. Jacory Harris gave a 20 of 25, 3 touchdown encore on Thursday night. Keep it up though, the real challenge is next week in Blacksburg. Stay in your hole if he tears up the Hokies, KEEP IT REAL!

Roger and Serena, get over it! I'm not on board with putting a microphone on athletes, your going to hear things like you just heard in Flushing. However, from Serena Williams and Roger Federer, it's a bit much. Two of the most decorated tennis players of the past 15 years just demonstrated as much sportsmanship as Mike Tyson during a Holyfield fight. In a word? It's pathetic. I've always wondered why athletes cry to the refs, the refs who have their minds on one thing, the rules! During any sport an athlete has 1,000 things running through their mind, somehow they think it's possible the ref wasn't

doing his one job. Serena wanting to shove a tennis ball down the throat of a linesman, a tad over the top. Roger continuing to rip the ref after the play has ended, give me a break. It's not like either of these two superstars is attempting to win their very first major, the money doesn't matter, both have more than you and I will ever have. Furthermore, what do you think is going to be the result? You complain to a ref, they say "hey, no problem your right, sorry!?!?" Forget hitting them in the pocket with fines, make them sit out a major. Next time you tell the linejudge where you want to shove your PENN tennis ball, you miss Wimbledon, going to do it again? Roger, your banned from Flushing Meadows for a calender year, keep it up and it'll be two. If this was another nobody, we wouldn't care, unfortunately both of these tennis players are invested and they should know better, KEEP IT REAL!

Thank you for following K.I.R.F. hope you enjoyed!

Editor's Note: Don't forget to click on our sister site RightNowPodcast to follow our weekly podcast.
Posted by Lynchy at Friday, September 18, 2009