Keep It Real Friday Is Back!

After a several week layoff, Keep It Real Friday is back. Like Tom Watson ripping up Turnberry or Lance back in Le' Tour, we're exploding on all things which need to be kept in check. (If your more the visual type, check out this week's installment of The RightNow Podcast also available on iTunes.)

How'd this get buried? Former Connecticut basketball star and current WNBA star Diana Taurasi suspended two games for a DUI charge earlier this month. Taurasi is the WNBA's leading scorer and somehow this story gets buried under the following; David Beckham back in the MLS, Bartolo Colon's rehab start, and Ryan Howard fastest to 200 career homeruns. Let me be the 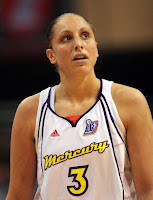 first to remind everyone that former Cleveland Browns receiver Donte' Stallworth killed somebody just months ago while driving under the influence. Allow me to remind you that NFL commissioner Roger Goodell has suspended Stallworth indefinitely and was quoted as saying "Stallworth's actions have caused irreparable harm." Now I'm a Diana Taurasi fan, she's fantastic and by her play on the court proves that isn't an opinion it's fact. However, why is it that this story is for all intents and purposes buried under meaningless others? Taurasi is pretty much the Chris Paul of the WNBA and can you imagine the backlash that CP3 would suffer if in similar circumstances? You know the outcome when anyone drinks and drives but for Diana Taurasi it should be a more than two games and should be running on The Bottom Line as we speak. As I've said before, why is it that professional athletes with money for a driver choose to get behind the wheel? One would think after Stallworth, they'd take a break. Let's lambaste Taurasi with the same venom we had for Stallworth, only difference is, Diana didn't kill anyone, thank god! KEEP IT REAL!

The Philadelphia Phillies add 37-year old pitcher Pedro Martinez. In other news, I got a full seven hours of sleep last night. It amazes me how The World Wide Leader covers the Pedro signing as if it were Jesus himself signing with the Phillies. In Citizens Bank Park, (where the Phils play) Martinez has

an earned run average north of six while opponents are hitting .286 against him in two starts. Less these next two months are being played in the Dominican Republic against minor league hitters, be nervous Philadelphia. With a combined 4.61 earned run average the Phillies staff sits just above the Padres & Nationals, and that's it. I understand your still in the Roy Halladay sweepstakes but where are your priorities? We don't need Petey to tell us that he isn't 26 and he doesn't pitch like he is 26, we know that. Did he forget? We watched the 17-15 record over the last three seasons in New York. We know that your last season in Boston and first in The Big Apple were the end of it. 434 innings and 64 starts in 2004 & 2005 combined? Yes that was totally going to work out for a guy who weighs under 200 lbs. and is built like a lamp. Congrats Phillies fans, you have a bottom of the rotation guy who is undoubtedly going to be injured by October 1st. Keep It Real!

Moratorium on asking Florida Gators coach Urban Meyer if he'd like to coach the Fighting Irish someday. Meyer has been in The Sunshine State significantly fewer years than Bobby Bowden, and they have the same number of National Championships.

That laid back coach in Southern California? Yep, Meyer has just as many trophies on his wall as Pete Carroll. Hahahahaha, and you think he's headed to South Bend? Crazy Irish fan, you have a better shot at Knute Rockne coming back to life and coaching the golden domers. Why would he leave a program which can recruit from every state in the country and get top athletes while playing in footballs best conference? Why would Urban Meyer give up the SEC to play the likes of Army & Navy? Sure Notre Dame has some bells & whistles but what coach watches what Charlie Weis puts up with and says "sign me up." I'll tell you which coach, none. The only guys Notre Dame will bring in are guys who haven't experienced a National Title at the their current school and guys who have thick skin. Urban Meyer is better off in Florida. What was the over under on Irish Fans who actually thought they'd be able to lure Urban, please. I'm going to go with all of them, is all of them an answer? They're delusional.KEEP IT REAL!

There isn't a city in baseball that would have boo'ed their steroid using cleanup hitter coming off a suspension. Chicago, New York, St. Louis, and Boston, all their fans would have done the same thing and it's the truth. Two years ago the Dodgers were just an average team with Joe Torre in the dugout, now? Now the Dodgers put one of the greatest hitters of the past twenty years in their lineup and he tears it up, and you thought they'd boo for that? Steroids are a non-issue to fans at this point. When he gets boo'ed in other cities that's because they just want to boo the other team, if he had their jersey on the reaction would be the same as in L.A. bank on it. Ramirez is never going to acknowledge what he's done, he'll never come out and say the words Performance Enhancing Drugs so in his case, this is over. As his paychecks resume and he continues to mash in Chavez Ravine, they'll be on his side. The Juan Pierre era in Mannywood is over and the Dodgers can get back to being explosive. You really thought they weren't going to give Ramirez an overwhelming comeback? Only 40-70 year old sports writers care about steroids at this point, KEEP IT REAL!