The regular season hasn't even been over for a month. We haven't even buried Michael Jackson, and somehow the NBA continues to dominate the headlines. Big names have been on the move but more importantly, the big teams have made splashes. Where the rich have gotten richer and the 2010 season is shaping up before it starts.

The San Antonio Spurs I've said it before, I'll say it again: The Spurs aren't done yet. After coming up short each of the last two years due mainly to injuries and a lack of youth, the Spurs were staring the end of a dynasty 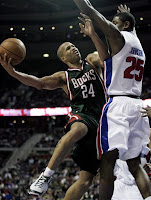 right in the eyes. Choosing to reload as oppose to blowing things up, enter Richard Jefferson. The Spurs find a way to dump the corpse of Bruce Bowen, washed up Kurt Thomas, and a 34-year old Francisco Oberto for Jefferson who hasn't missed a game in two years and gives the Spurs a solid wing player who can score, something they've seriously lacked. Richard Jefferson knows what its like to play with quality point guards (see Jason Kidd) and now playing with a younger more athletic version in Tony Parker, expect his opportunities to greatly increase. San Antonio is prepared to make another run at their 5th ring since 1999. Impressed yet? A healthy Manu Ginobili, Tony Parker, of course Tim Duncan and now Richard Jefferson, be ready the Spurs are making their move.

The Orlando Magic They may be the only ones who think they're good enough to make it back, but at least they're doing everything they can. After being dispatched by the Lakers in The Finals, the Magic promptly struck a deal with New Jersey to send stand out rookie Courtney Lee to the Nets

in exchange for 11-year veteran two guard, Vince Carter. Carter may be past his prime but he can still score with the best of them. With Carter arriving in Orlando in what seems to be a homecoming for the newly acquired Magic star who makes his home in Florida, Carter is sure to turn it on to make a run at the NBA Title. Over his career Vince has averaged 23 ppg. and is sure to give the Magic that scoring threat which they lost with the departure of free agent Hedo Turkoglu. As All-Star guard Jameer Nelson makes his comeback in the 2009-2010 season and paired with the most talented big man in basketball, Dwight Howard, the Orlando Magic should be able to give the Celtics and Cavaliers a run for their money in the east. Don't be shocked if the Magic get off to a great start.

The Cleveland Cavaliers Doesn't matter who they gave up. Doesn't matter that they choked away what seemed like their best shot at an NBA Title. The only thing that matters now is getting it done. Adding still the largest man in the game, 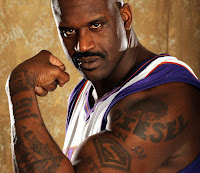 37-year old Shaquille O'Neal, the Cavs are drawing their mark in the sand. The Cavaliers watched their seven footer shoot one too many three-pointers before realizing, you don't beat Dwight Howard inside by shooting from the arc. Well shooting isn't something Shaq does, infact we're not really sure what it is Shaq still does. However, if your goal is to wear out Dwight like a rented mule, then The Diesel is the guy to do it. Shaq finished last season playing in 75 games scoring nearly 18 points a night and pulling down nearly 9 rebounds a night. If there is anything left in his 330 lb. frame, watching Stan Van Gundy and Kobe Bryant play for a title might just get it out of him. Shaq doesn't get traded to teams unless their in line to make a run at a trophy. The Cavaliers are making it known that they plan to do everything they can to keep LeBron in Cleveland, the final question has to be: Is this enough?

odd couple been formed. Yes, Ron Artest and Kobe Bryant is just as crazy as Dennis Rodman and Michael Jordan, if not crazier. Artest is a defense playing, fan fighting, technical foul getting, certifiable whack job. Kobe Bryant is a champion, a four time champion who is the games most dominant closer. I don't think people are realizing that the only player who can slow him down is now on his own bench. Trevor Ariza who? The Los Angeles Lakers are taking their shot back at San Antonio, what better way to neutralize Richard Jefferson than with Ron Artest, the man who knows no boundaries. Are we ready for the Lakers and Ron Artest, Phil has handled The Worm, and you think Ron has no boundaries? Pau, Kobe, Ron, and Lamar? The Lakers may be an odd mix but they've already won one, now they just got that much better.

The Boston Celtics Yes. They are included in The Champs. For all accounts the Celtics were a busted Kevin Garnett knee away from repeating, truly believe that. Furthermore this postseason taught Celtics GM, Danny Ainge, two simple things: (1) You got lucky with P.J. Brown, see Mikki Moore circa 2009. 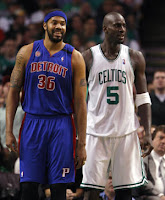 (2) Insurance premium on Kevin Garnett must be addressed. That's why the entire contingent, Danny, Wyc, Kevin, Paul, and Ray were visiting one Rasheed Wallace in Detroit in the middle of the summer. Believe me, there is no other reason to be in Detroit, Michigan, ever. Wallace agrees to come to Boston and that's the move. That is the move that shows the Celtics aren't about to blow things up, they are once again going for broke. Wallace is disrupting, Wallace is obnoxious, and Rasheed Wallace is the toughest guy to guard in the entire league. A near seven-footer who knocks down three-pointers and can play center, power forward, and small forward. The Celtics are putting this guy next to Kevin Garnett. You scared? Better be. Garnett and Wallace would produce one of the most dangerous and championship hungry duos ever created. Two guys near 6-11 ripping down boards and yelling obscenities, eeeek. Whatever Rasheed has left in him is going to come out this season, you don't come to Boston for the weather, you don't come to Boston for the mid-level exception, you come to Boston to win a championship, that's the only reason you do. The man who wore a championship belt rather than a championship ring has landed in The Bean.

My guess is that more than one of these moves have influenced another. More than one of these moves have been done to combat another. Richard Jefferson added to the Spurs, Ron Artest to cover him. The Magic get more athletic adding Vince Carter, the Cavs find someone to bang with Dwight. The Cavs add Shaq, the Celtics add Rasheed to give him fits. The NBA's elite are going for a ring in what promises to be the greatest NBA hot stove in years. If the regular season and 2010 postseason is this exciting, we're in for it. Where Amazing Happens!
Posted by Lynchy at Monday, July 06, 2009