Put the AFC Wild Card games into perspective; The Texans turned the ball over five times and got boat raced on their home field. The undisciplined Bengals were as undisciplined as a team can be when their opportunity to get Marvin Lewis his first playoff coaching win in seven tries was on the line. Chiefs & Steelers advance.

Brian Hoyer is a good back-up, spot starter, probably going to win more games than he'll lose playing in the AFC South, but win you a couple playoff games and get you to a conference championship?!? No. The Texans don't have an All-Pro rusher in their backfield, their tight-ends don't help out the quarterback when the ball has to come out quick. What does that mean? It means a defense is going to make Brian Hoyer beat them. Which obviously Brian Hoyer isn't going to be able to get done against a very good, opportunistic defense. Should Houston have pulled the plug on him after a couple of those turnovers? No, Brandon Weeden wasn't the answer. At the end of the day, the Texans have a good defense, superstar wide receiver, but still need a quarterback to build the franchise around, that was clear yesterday. 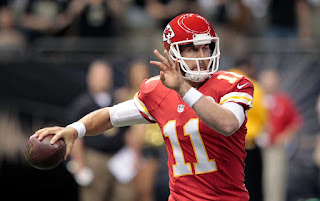 As far as the Chiefs go, that's a good football team with a veteran quarterback who knows his limitations. I'm always impressed at an offense that knows what they are regardless of who gets injured. The Chiefs lost Jamaal Charles in early October, and it was next back up from that day forward. Very similar to Pittsburgh and Seattle, both playoff teams who lost their top backs and didn't seem to miss much of a beat in the run game. Credit head coach Andy Reid and quarterback Alex Smith, they run an offense that plays to its strengths; Run the ball, mix in the pass, and don't turn the ball over. I won't call Smith a game manager however, he's better than that. Smith is a mobile quarterback who now uses all of the offensive weapons at his disposal. Seven Chiefs caught balls from Smith yesterday, on a day where he may have lost his most electric offensive weapon, wide receiver Jeremy Maclin. The 30-0 beat down Kansas City put on Houston was a complete victory, a no doubter.

These two teams do not like each other, for real don't like each other. That was
real dislike, coaches, players, fans, there was no love in Cincinnati last night. Unfortunately, ask somebody who has ever played a sport against someone they didn't like, keeping your head and staying focused on the task at hand is by far the hardest thing to do, and that is what determines who wins. I agree with everyone who rushed to the defense of Cincinnati, Steelers assistant coach Joey Porter didn't belong on the field, the refs should have thrown a flag once they heard him going at opposing players, they didn't and it escalated. Unfortunately, Bengals veteran DB Adam Jones reacted poorly, couldn't keep his head, gave the Steelers an additional 15-yards at the worst possible time. Hold on though, lets circle back to the play before all the extra-curricular activity took place. Bengals LB Vontaze Burfict's 15-yard penalty for the hit on Antonio Brown started the problems. Burfict is a known knuckle head, who has talent for days but can't seem to get out of his own way, or his teams way. These are the type of emotional reactions that cost teams games. There are two known outside factors that cost teams a victory when games are close; 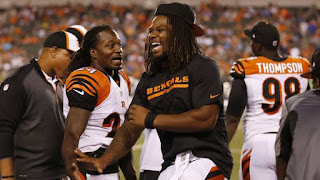 Which brings us to Cincinnati's other problem. That game was in hand last night, under two-minutes remaining with the lead and the ball, Bengals running back Jeremy Hill makes the one mistake you cannot make as an offensive player, he fumbled the ball. With Steelers quarterback Ben Roethlisberger, injured or not, being one of the few quarterbacks in the league that you cannot give the ball back to with time remaining on the clock, it's no wonder the Bengals lost that game.

Second take-a-way, Cincinnati has to go out and win a playoff game at some point. Whatever happens in the regular season going forward for Marvin Lewis and that team, means nothing, absolutely nothing. I thought back-up quarterback A.J. McCarron played well enough for the Bengals to win, so I really can't tell you that Andy Dalton's Bengals would have seen a different outcome. I've always respected Cincinnati ownership for staying the course with Marvin Lewis and not being one of the other two-dozen NFL franchises that installs the revolving door in the head coaches office, but someone has to take the blame for the continued playoff disappointments. Players like Adam Jones and Vontaze Burfict didn't come to Cincinnati with spotless histories, they didn't, so as good as I believe they are, you have to expect a certain level of this, so who in the front office is responsible for bringing in a player who puts you in a better spot to actually win these games? Someone in Cincinnati, and I admittedly don't know who that would be, needs to find a way to address how to keep your head in the right space in a close game.