Green Bay Packers There are players that you just like. Guys that you ignore what their 40-times are, don't care what they look like during their "shuttle drill," just players you think can make plays. For us, that player is former Michigan State defensive tackle Jerel Worthy. We don't know how well he's going to get along with future Hall of Fame defensive back and former Michigan Wolverine, Charles Woodson, given he's got an

arm tattoo of a Spartan crushing a Wolverine, but we'll see. Worthy is a 6'2", 310 lb. monster and despite his admittance that he 'takes plays off,' we still like him. Grabbing Worthy in the second round after getting stud USC defensive end / outside linebacker Nick Perry in the first round, we really like what the Packers did early. If Perry and Worthy can step in and instantly help a porous Packer defensive line from a season ago, general manager Thompson will have landed a very quality pair of pass rushers. While moving up to get an underrated Casey Hayward at pick number sixty-two, a cornerback from Vanderbilt, wasn't exactly what we expected, it still gives the Packers depth in the secondary. Final Grade: A-

Detroit Lions The Lions are super interesting to me. They're right there ready to make the jump to scary good slash Super Bowl contender, no I'm not speaking out of turn. 10-6 A season ago, with a quarterback who just posted a 5,000-yard passing season, a class in 2011 which includes the likes of Super Bowl winning quarterbacks Tom Brady, and 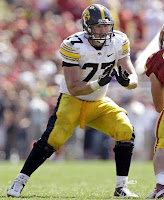 Drew Brees. With that being said, you better believe the Lions greatest area of opportunity was to protect quarterback Matthew Stafford for the long haul. By drafting Iowa standout tackle Riley Reiff with the twenty-third pick in the first round, the Lions did just that. Reiff will bolster the backside of the Lions offensive line and seriously give Stafford plenty of time to pick apart NFC secondaries, including defending NFC North Champion Green Bay. Reiff automatically made me like the Lions draft, no matter what happened there after. The Lions took a stab and picked up injured Oklahoma receiver Ryan Broyles, a player that if it works, could give the Lions a very lethal 1-2 option for Stafford to throw the ball to. From then on out, the Lions went defense in a very 'Jim Schwartz' way, adding three cornerbacks and three outside linebackers. Final Grade: A

Minnesota Vikings I think the Vikings need to be taken seriously, this years draft was somewhat brilliant. Give 'Vikes general manager Rick Spielman some credit where it is due. Not only did they draft the player which was presumably the top play on their draft board, USC's mammoth offensive tackle Matt Kalil, but they were able to pick up more picks and still to do just that. Kalil will be the blind side protector of 2011 1st round

selection, quarterback Christian Ponder, a major long term investment here. Why do I like the Vikings draft so much though? Not only did they pick the player they wanted too, but after that they filled a bunch of holes, what smart teams do in the draft! The Vikes reached for Notre Dame safety Harrison Smith, but he was their guy. They stacked up their secondary with Smith in the late 1st round, Josh Robinson from Central Florida who fell right in the Vikes lap in the 3rd round, and then added another Notre Dame defensive back in Robert Blanton later in the draft. Headed into the weekend the two biggest areas of need for Minnesota were the secondary and protecting Christian Ponder, they nailed both of those right on the money. Final Grade: A+

Chicago Bears The first thing I'll point out about the Bears draft is that I don't hate it, I just like how each of the other the three teams in their division drafted much more. At #19 you could argue the Bears had one of the biggest reaches of the first round, Shea McClellin, DE, Boise State. McClellin is a phenomenal (took me two spell checks to spell that word correctly) player, but it should alarm the Bears that he wasn't a secret and the interest for his talents that high really wasn't there. Then there 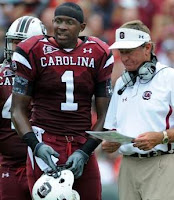 was the clear move the Bears were making in the second round buying the sliding stock of the overweight South Carolina pass catcher, Alshon Jeffery. Look, Alshon Jeffery is a very good player, but he's slow and extremely overweight for his position, there is a reason everyone calls him a gamble. Adding the problematic Brandon Marshall in the off season, a former teammate of quarterback Jay Cutler's in Denver, and bringing in Jeffery, the Bears are attempting to move the dynamic Devin Hester out of the offense, it's a smart move. Back to their draft, with three of their final four picks, the Bears went secondary and playing in a division with Aaron Rodgers and Matthew Stafford, I don't blame them. Final Grade: B-