South of the Border No Mas!

Back in the Commonwealth after a week in Mexico, and thank God. Now don't get me wrong, I thoroughly enjoyed the 85 degree weather, nothing but sunshine, and lack of having to do work. But trying to find access to some relevant sports information, let's just say it left something to be desired.

(Note to self: schedule vacation to foreign land to begin on any other day than NFL Draft Saturday. I don't even know if the entire country it is held in cares enough, let alone a third world tourist destination)

Check in at hotel went smoothly. Jose the Bellhop is transporting bags to the room, and I am racing him up the stairs to find out if the NFL Draft will be televised in Cozumel, Mexico. No luck -- a station that is posing as ESPN seems to be intent on showing me futbol, just not the kind I'm interested in. After changing into my bathing suit and slapping on some SPF 90, I decide to scroll through the channels one last time and BAM! Just like that Jake Long is walking to the podium and NFL Commish has just introduced the number one selection overall:

I must give a thank you to my girlfriend, who is more than putting up with my excitement that I have found the draft. And even though it is in Spanish, I'm about to wet myself. Long, Long, Ryan, McFadden, Dorsey . . . . . .then the unthinkable happens, the "Mexican ESPN" determines that is enough and futbol is back on. UGH! Anyway, first day in Mexico, no big deal, the sun is calling us:

Day 2 or 3 or maybe 4; who knows I'm on vacation. I decided to re-visit ESPN Mexicana (that is what I've dubbed the station which maintains it is part of the World Wide Leader) Mexican Sportscenter is on, and I couldn't be more delighted. No really, I'm pretty jacked up about this. In the States, we delegate a 2 to 3 minute

piece called ESPN Deportes (ESPN for the Spanish speaking consumers) so why wouldn't Mexican Sportscenter do the same for their English-speaking consumers. Give me a couple of NBA playoff scores, maybe even a little baseball action. I really don't feel like I'm asking for too much here. Well, they are giving me a teaser and showing a couple of highlights, so I fully expect to see a score at some point. Ask and I shall receive: I've been updated that the Celtics are now tied in a series that should have ended three days ago. Breathe Nick, you're on vacation. The Red Sox were dispatched by the Devil Rays in three straight games. I had to move the clock back an hour, maybe the scores are reversed as well? Nope. Thank you ESPN Mexicana.

Note: Mexican Sportscenter is a tad racy. The anchors always include one woman (I support this) who shows a bit too much cleavage for Sportscenter. I don't know if that is a bad thing, but I'm just not used to it. Secondly, this constant need to show soccer -- sorry, futbol -- is wearing thin on me.

So I've discovered a computer that has Internet access in the lobby. I know, I know, I'm on vacation, but seriously this was the last thing I expected to find. The keyboard on the computer is virtually the same with a few exceptions: two letter N's (one with a tilde over it), lack of @ symbol(this makes it hard to e-mail), and about 15 Alt buttons. I've only ever used 1 of the 2 that the American keyboards 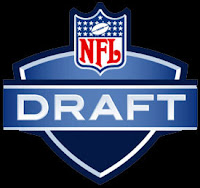 have, so I'm intrigued by the opportunity to have an additional 13 on this Spanish keyboard. Anyway, I can't read the sign above the computer, but from what I can gather, the resort is requesting you spend a maximum 15 minutes at a time on the Internet, and they would appreciate if you didn't visit pornographic websites. (The computer is in the lobby with people all around. I'm not sure this needs to be said, but I am in a foreign land so you never know.) Quick visits to NFL.com to find out what the hell happened on draft Saturday, and then to ESPN.com to find out when the Celtics would play next, and I'm off. I used only 5 minutes of my allotted 15, so you're welcome to the other resort guests.

Did you really think I wasn't going to comment on the draft?

1. It seems to me that Jerry Jones may have learned a thing or two from the Tuna years. Out with Julius Jones in with Felix Jones, the Arkansas back played a fine second option to Darren McFadden and is sneaky fast. Jerry was determined to upgrade the secondary and did so in the first round with South Florida DB, Mike Jenkins and in the late rounds with Boise State DB Orlando Scandrick. Preparing for the future may not have always been Jerry's best attack but in 09' he might need to have a back in waiting when Marion Barber cashes in on free agency, enter bruising Georgia Tech back, Tashard Choice. Big D isn't crying about the Tuna's off season heist of their front office and coaching staff, they are preparing for a deep postseason run.

2. The Steelers are re-tooling and the AFC better watch out. They have dramatically improved their offense by adding the second best back in the draft (Illinois RB, Rashard Mendenhall) to their already explosive backfield with Willie Parker. Despite Hines Wards' feelings, the Steelers went out and answered the request of their quarterback, drafting BIG wide receiver Longhorn, Limas Sweed at 6-4. After losing perennial pro bowler, Alan Faneca to the Jets, Pittsburgh drafted another Longhorn, Tony Hills at 6-6 and 305lbs. The Steelers had the best draft in 2008, congrats.

3. Don't sleep on Miami. I'll give it a year or two before the Dolphins are actually worth discussing because lets be honest you don't go from 1-15 to a playoff contender over night but they are making some giant leaps toward improvement. Not only did the Tuna stay away from the likes of Darren McFadden, Matt Ryan, and Glenn Dorsey but he went after a cornerstone of an offense in Jake Long. After making the mistake of not selecting Orlando Pace years ago, it seems the Tuna has learned a few things as well. A monster defense end in Clemson's Phillip Merling (6-5, 282lbs) Parcells went ahead and added another need position in round 2, someone who was good enough to be a first rounder at that. JUST in case you were worried that John Beck may not be the "Franchise", Parcells grabbed insurance in former Michigan signal caller, Chad Henne. I like keeping Jason Taylor, for now, and not giving him up or to little. Shhhh, but the Fins are getting better.

Enough about the draft, even I'm sick of hearing/talking about it at this point. Back to Mexican television, I believe that Mexico is about ten years behind maybe even more as it comes to televsion. Now before you call me every Nancy, I was only watching the following shows because there was absolutely nothing else on television in english:

Unfortunately Friday came and my vacation was almost over, the Celtics are gearing up for Game 6 of their first round series against the Atlanta Hawks and the question has been swirling around me all day long: Will ESPN Mexicana grant me the Celts game come 8:00?

The Answer: Yes (small victory for me)

By now of course you know the result of that Game 6 as well as the following Game 7 and Game 1 of the Celtics second round series against The Cleveland Lebrons. I wanted to talk all the Celts fans off the edge here so this is what I got. Atlanta clearly wasn't as good as Boston and may have stole a couple games from the Celtics in

Atlanta, Game 6 however was a travesty. The Hawks shot a mind numbing 47 free throws compared to the Celtics 25, and despite Doc Rivers clearly losing his mind the Celtics still only lost by 3. As far as this series with the Cavs go, it'll probably go 6 or 7 with the Celtics winning in the end. Boston got 4 points out of Pierce and Allen while Cleveland had to sit there and watch Lebron miss a game tying bunny and finish the night 2/18 from the field. So it cancels out, I take the likelihood that Garnett drops 20 a game and 10-15 boards over Zydrunas Ilgauskas scoring another 22 points and grabbing 12 boards each game. Nuff Said, Stay Tuned.

Ah, anyway I'm back in the states and I got my George Bush Tax Refund back so time for some strippers and booze (when I say strippers and booze I mean student loan payments and gas at 4 bucks a gallon) Back to reality.
Posted by Lynchy at Sunday, May 04, 2008